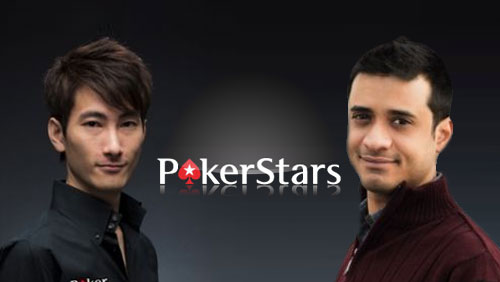 PokerStars have halted their Team Pro salary reductions by announcing two fresh new signings. For the first time in PokerStars history, Japan and India will have representation in the most coveted team in poker, as Kosei Ichinose and Aditya Agarwal join the ranks.

Agarwal, who hails from Darjeeling in India, was a student at Drexel University in the US, where he enrolled for a degree in engineering, before switching to marketing, and then onto online poker. He will play on the PokerStars site under the name “Adi Agarwal” but is already well-known within the online community, winning over $4.2m playing under the pseudonym “intervention.”

Agarwal also has an impressive live-tournament resume with close to $400,000 in live tournament earnings including three in the money finishes in the $10,000 World Series of Poker (WSOP) Main Event.

“I’ve been playing at PokerStars since 2004, so this is a dream come true for me,” Agarwal said. “As a poker ambassador I want to help promote the game in India, and inspire more players to play and enjoy the sport.”

The second Asian signing is Kosei Ichinose. The man from Japan joins PokerStars Team Online pro Naoya Kihara as the only two Japanese players on the Stars payroll. Ichinose holds the acclaim for being the first Japanese player to ever achieve Supernova Elite status.

The former English and business student fell in love with poker whilst studying in Canada circa 2006 and soon his studies gave way to a professional career on the dirty green felt. Ichinose has major online results in SCOOP, WCOOP and Sunday Major action, along with over $300,000 in live tournament action including an Asian Poker Tour (APT) High Roller victory in Cebu.

“I’m proud to be associated with PokerStars as I have achieved so much in the game by playing on the site,” he said. “I now look forward to helping spread the popularity of poker in Asia and representing the brand at major international tournaments.”

Kirsty Thompson, PokerStars’ Head of Pro & Celebrity Management, was delighted with the acquisitions: “The signing of these Team Pros from India and Japan is an important step in helping promote the game in countries where poker is only just coming to the fore. Both players are highly respected within the poker sphere, and their success and passion for the game will no doubt spread throughout their local and national communities.”

The Japanese and Indian Team pro patches will make their debuts at the Aussie Millions later this month.