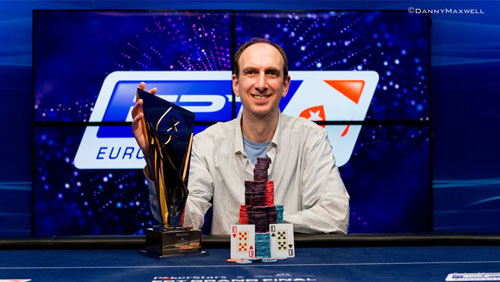 What a way to kick off the largest EPT Festival in history. 71 entries creating a total prize pool of €6,888,420, and all of the very best players on the planet were in attendance. In the end, it came down to two very different poker players. It was a clash of styles, man versus boy, and the evergreen legend versus the future of poker: Erik Seidel versus Dzmitry Urbanovich.

The young Pole wasn’t even born when Seidel starred in that immortalized heads-up confrontation against Johnny Chan, in the 1988 WSOP Main Event. That was Seidel’s first live tournament score. There has been many more since. His latest victory – his third seven figure score – sees him leap frog Dan Colman and Phil Ivey to sit in third in the all-time money charts.

It was a great final table. These things always are. It’s been a great week for Scott Seiver. The new Global Poker Index (GPI) World #1 made the final eight. He always does. Unfortunately, the rungs were slippy, and he was the first one out after his J3 walked into the AJ of Fedor Holz, on a jack high flop.

The World Championships of Online Poker (WCOOP) Main Event champion was the next out. Igor Kurganov making the call, with A9, after Holz jammed with KJ. Two aces, on the flop and river, and then there were six. Two hands later and six became five. Urbanovich shoving with 63hh, from the small blind, Thomas Muehloecker calling with AJ, in the big blind, and a three on the flop did all the damage.

Urbanovich then took a stranglehold on the competition after ending Kurganov’s challenge. Firstly, he flopped trip fours, against Kurganov’s A8, on [5c] [4c] [4d] [6s] [Ah], to get a chunk of value from the REG man, and then he finished the job with TT>AQ for all of his chips.

Dario Sammartino found his way into his first-ever €100k buy-in event, after winning a €10k satellite, and he parlayed that into a €709,500 score after being eliminated in fourth. He was unlucky as well. The Italian moving all-in, from the big blind, holding AK, Urbanovich called, in the big blind, with AQdd, and hit the perfect runner-runner flush to take 13.3m chips into the three-handed skirmish against Seidel (3.3m) and Max Altergott (1.3m).

The heads-up phase was reached after the poker gods laid out another layer of luck. Seidel moving all-in, holding Q5o, in the small blind, Altergott calling with pocket eights, in the big blind, but a board containing two pair, for the New Yorker, gave Seidel a few more chips as he faced off against Urbanovich with a 3:1 deficit.

Urbanovich, who was coming off the back of a record breaking four EPT side events at Malta, was the odds on favorite to start EPT Monte Carlo in the same stunning fashion, but the experience of Seidel shone through. The New Yorker managed to eek his way into the chip lead before calling a K9 shove, holding pocket tens, and it was good enough for the win.

Urbanovich picked up €1,446,600 for his runner-up spot, and it was enough to propel him to the top of the all-time Polish live money charts. It will also help cement his position at the top of the 2015 GPI Player of the Year charts.
But for the moment the spotlight is shining firmly on one of our games all time greats.

The man. The legend. Erik Seidel.