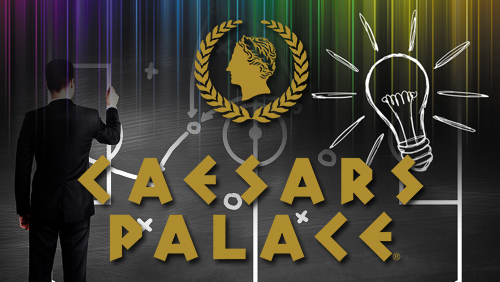 When a multibillion dollar bankruptcy looms, lawyers, accountants, and legalists of all shapes and sizes huddle together in rugby scrum as dense as a neutron star and come up with some really complicated, convoluted, confusing, mind-numbing shuffling shell game filled with so many acronyms that you’ll forget how to sing the alphabet.

Don’t blame Caesars. They’re just using the tools available to them built up over hundreds of years of laws and bureaucracies designed to “protect the markets” layered on top of one another in a way that feels like each generation of politicians was simply trying to make his mark on the regulation pile without at all worrying about how much sense it makes. The maze becomes so tortuous that massive bankrupt companies like Caesars can hide in the thicket and hope to wait it out, praying that nobody will ever find them in there.

An investment in Caesars, either the main stock (CZR) or Caesars Acquisition Company (CACQ), is essentially a bet that the company can remain hiding in that thicket indefinitely until the dogs are called off. That’s what going long Caesars means. It’s not about earnings, fundamentals, growth prospects or anything else. It’s just about whether they can escape or not by hiding for as long as possible in that regulatory labyrinth dreamed up by the ingenious brains of generations of former student council presidents.

Caesars is the only company I’ve seen that actually has to put a chart of its organizational structure on its public filings. Here it is: 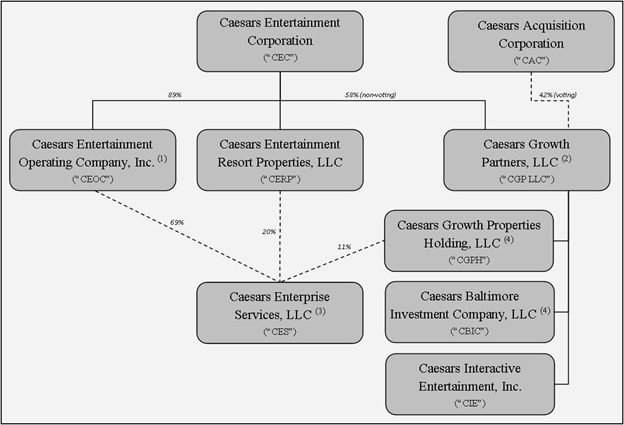 That chart actually physically looks like a rugby scrum.

The bottom line hard numbers as to what this organizational tangle are as follows, in terms of annual maturities of long term debt:

The important numbers are in bold. It is actually fairly enlightening to look at the quarterly balance sheet of Caesars which is forcing this bankruptcy now. If you look at the shift from Q3 to Q4 in its debt totals, Q3 saw only $140M in current/short term debt and $23.9B in long term debt. Then, in Q4, long term debt shrank to $7.4B, but current debt exploded to $15.8B.

In other words, that debt was all coming due, and the writing was on the wall. As far back as 2006 the 2015 debt maturity swell was becoming evident. See page 73 here, where 2015 maturity reaches $1B. By 2012, current value of 2015 debt was about $12B (page 41). So there were no surprises here as to timing and when this had to happen, barring a miracle turnaround.

As for the shell game, here is how it seems to work. If you take a look at Caesars Acquisition Company, which owns 83% of the online gaming segment Caesars Interactive Entertainment (CIE), go check out its earnings statement and you’ll see there’s nothing on it. Strange, yes?

CAC serves as CGP LLC’s managing member and sole holder of all of its outstanding voting units, and subsidiaries of Caesars Entertainment hold all of CGP LLC’s outstanding non-voting units. However, based upon the structure of CGP LLC and the related economics, CGP LLC has been determined to be a variable interest entity of which Caesars Entertainment is the primary beneficiary. Therefore, CAC does not consolidate CGP LLC into its financial statements. Instead, CAC accounts for its investment in CGP LLC using a balance sheet approach to the equity method of accounting, referred to as hypothetical liquidation at book value (“HLBV”) accounting.

So it’s all stuffed on the balance sheet in the form of long term investments. There is nothing wrong or controversial about HLBV itself, as it’s simply a different form of accounting. The question is, does this accounting method it help CAC shield CIE from the understandably grubby arms of bondholders? It seems to me at least that the HLBV method of accounting for CAC is no accident, as there may be (to be clear I have no proof of this) some kind of stipulation in Caesars bondholder contracts that states that long term investments cannot have liens on them, or something along those lines that enables them to protect CIE’s value from bondholders even if they are successful in suing Caesars for shuffling assets unfairly. Otherwise, why go through the trouble of tucking CIE under two layers of ownership (CGP) within a separate entity (CAC)?

To make this rugby scrum even crazier, Caesars is now trying to merge Caesars Acquisition Company back into Caesars Entertainment Corporation. This would be the grand finale of the reshuffling plan, allowing it to soak back up all its valuable assets while shedding the toxic ones. It is this final step that is really angering bondholders and they are not going to go down without a fight. The risk section of Caesars’ filings is chock full of warnings as to what may happen if this final step is not approved:

Failure to obtain the required approvals within the expected time frame, or having to make significant changes to the structure, terms, or conditions of the Merger to obtain such approvals, may result in a material delay in, or the abandonment of, the Merger. There can be no assurance that these conditions of the Merger will be satisfied. Even if the CEOC restructuring plan is confirmed, under certain circumstances the Exchange Ratio may be adjusted or the Merger Agreement may be terminated. We can therefore give you no assurance that the Merger will be consummated, in which case we would not realize the anticipated benefits of having completed the Merger, which may adversely affect us.

So basically, what it comes down to is a judge’s decision. Can Caesars get away with this or not? Even if it does, the newfangled reshuffled company will still have $8.6B in new debt to deal with, after having shed $18.4B in defaulted debt. $8.6B is still a huge pile of debt, and I bet it’s almost all floating debt.

So in order to get out of this unscathed, Caesars will have to prevail in court over lawsuits concerning its CEOC asset shuffle, prevail in court allowing the merger of CAC back into Caesars Entertainment, and somehow still deal with an $8.6B debt pile for all that.