The Chinese authorities have launched a criminal investigation into the Asia Pacific Poker Tour Nanjing Millions according to reporters working for the World Gaming Group. 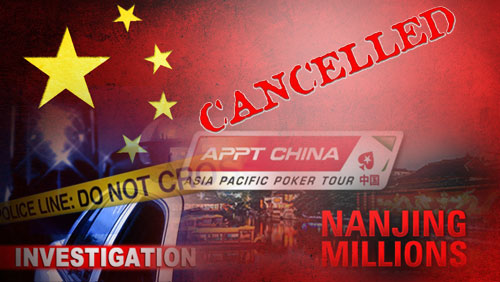 I bet PokerStars are wishing that they only had one shade of black.

According to news emanating from World Gaming Group, PokerStars, and their Asia Pacific Poker Tour (APPT), could be subjected to a criminal investigation, after China’s television broadcaster CCTV reported the hosting of APPT Nanjing Millions as a ‘criminal event’.

The event was cancelled, during the fourth day of action, after police raided the Wutaishan Sports Center in Nanjing. 2,300 players had already taken their seats, making it one of the largest tournaments to ever be held outside of the United States.

Head of Corporate Communications for both Amaya Inc. and PokerStars, Eric Hollreiser issued a statement in the wake of the disruption.

“After three very successful days of tournament poker, the organizers of the Nanjing Millions decided to postpone the event in order to address questions from local authorities. The tournament was sanctioned by the local government through the Jiangsu Provincial Chess Sports Association and held at the Jiangsu Wutaishan Sports Centre, an official Olympic venue. The event itself was organized and operated by a local poker operator, Star Poker Club, and sponsored by APPT China. We are in contact with Star Poker Club and are seeking additional details. The organizers have issued a statement apologizing for the inconvenience and plan to resume the tournament in the near future.”

According to the report in the World Gaming Group, the event will not now be resuming, and it also suggests that the buy-in money will be returned. It is said that the tournament attracted a number of high profile Chinese stars including the singer Wang Feng, and Olympic gold medalist’s Qiu Jian and Chen Qi.

Confusion reigns, and it’s easy to see why. The Nanjing Millions isn’t the first live tournament to be held in China, and the hosting of the event wasn’t exactly a trade secret. The World Poker Tour (WPT) has held events on Hainan Island, and the APPT set a new record when China’s Chen Qin defeated 2,732 entrants in the largest ever event held outside of the US. The Beijing Millions was held in the Beijing Star Poker Club in the summer of 2014

“It’s been a historical week. APPT President Danny McDonagh said in the wake of that event, “Not just the record itself but how it may change the future landscape for poker in China.”

One assumes his quote will be a little more colorful this week. World Gaming Group says they have been in contact with McDonagh, and he is still in China talking to a legal team.

We will bring you more news on this event as it rolls in.