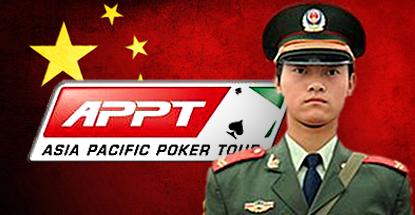 Chinese authorities have shut down the Asia Pacific Poker Tour (APPT) 2015 Nanjing Millions for as yet undetermined reasons.

The Nanjing Millions had gotten off to a roaring start, with player demand compelling the organizers to add an extra Day 1 flight. Over 2,300 players had registered for the event, which was supposed to conclude on Sunday. But the poker party ended abruptly Friday afternoon when local police shut the event down cold.

World Gaming Magazine reported that police had blocked the entrance to the Wutaishan Sports Center host venue. A notice pinned to the door indicated that the tournament organizers were “suspected of illegal gambling” and that “the event is being ceased.” WGM reported that the organizers’ office had been similarly locked down and that players had been left in the dark as to what exactly had transpired.

The Nanjing Millions had been feted as the latest move by PokerStars to reestablish itself on Chinese soil. PokerStars Macau had teamed with Beijing’s Star Poker Club to sponsor the event, much as they had on last year’s Beijing Millions and Beijing Cup events.

As news of the kerfuffle spread, Stars spokesman Eric Hollreiser issued a statement saying the Nanjing Millions organizers had “decided to postpone the event in order to address questions from local authorities.” Hollreiser said the organizers were “apologizing for the inconvenience and plan to resume the tournament in the near future.”

Hollreiser said the Nanjing Millions had been approved in advance by the Jiangsu Provincial Chess Sports Association. Similar poker events – like the World Poker Tour stops at the MGM Grand Sanya on Hainan island – had received the blessing of authorities as sporting events, not gambling games. However, the Asian Poker Tour was forced to scrub its APT China 2014 event after struggling to convince local officials to issue the necessary permits.

Gambling on anything but the lottery is illegal on the Chinese mainland. Chinese authorities have recently been cracking down on various forms of gambling, from public officials visiting Macau to unsanctioned online lotteries.

WSOP Gold: How the ‘I Knew It’ call killed the Johnny Bax dream
Paul Seaton
2 hours Ago