Home / Poker / PokerStars Head Back to China for Nanjing Millions 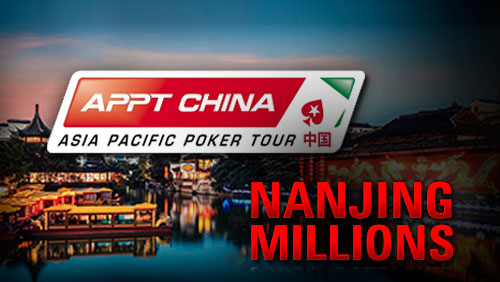 PokerStars, the largest online poker room in the world, will be heading back into China, as the sponsors of the Asia Pacific Poker Tour 2015 Nanjing Millions.

America might not want them, but the People’s Republic of China do.

PokerStars will be returning to the land of the rising sun, as the Asia Pacific Poker Tour (APPT) announce plans to sponsor the 2015 Nanjing Millions in the Jiangsu province.

The Jiangsu Wutaishan Sports Center will host seven events 14-19 April. All events will be No-Limit Hold’em, there is a team event and a ¥3,000 Main Event (around $500 bucks). The venue knows a thing or two about hosting big events. In 2014, it hosted the basketball, football and table tennis at the Youth Olympics.

The Jiangsu Provincial Chess Sports Association has approved the event. PokerStars will team up with Beijing’s Star Poker Club to ensure the event runs smoothly. The pair has form. In 2014, they worked together on two PokerStars events: the Beijing Millions and the Beijing Cup. At the time, the Millions event became the largest event held outside of the U.S with 2,732 entrants, and the largest live event affiliated with PokerStars.

“The growth of poker in China has been tremendous and we are committed to support this sport throughout the region,” APPT President Danny McDonagh told the Poker Asia Pacific Blog. “Nanjing is a key location that allows players from all over the country to participate. The previous two Beijing events last year were very successful and we are proud to be a part of this government-supported event”.

One man who will be excited about the return of PokerStars will be Yang Zhang. The Chinese national was runner-up in the Beijing Millions, for $113,463, and then won the Beijing Cup for $101,683. He will be hoping to make it a hat trick in Jiangsu.

Star Poker Club looks forward to bringing our poker tournaments to the city of Nanjing,” HSC principal and former Asia Player of the Year (APOY) Jian Yang told the Poker Asia Pacific Blog. “The continued partnership with PokerStars.net and APPT China is very exciting as the players in the region continue to show their confidence in attending events sponsored and supported by these groups.”

When it comes to baring a little bit of flesh to the Chinese public, PokerStars are not alone. The World Poker Tour (WPT) also recognizes the power of the gamblers in the East. They have held WPT events in Sanya and before Christmas announced a major Asian licensing deal with Our Game International.

Four Signs That the Future of Poker is in Good Hands
Lee Davy
20 August 2014
.