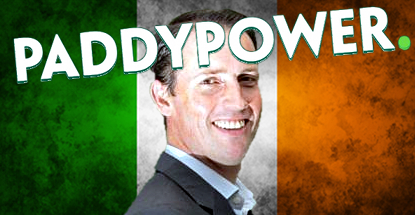 McCue’s pay rise was revealed this week via the release of Paddy’s 2014 annual report (ever so humbly titled “The Year Paddy Power Saved The Earth.”) McCue’s base annual salary now tops €700k, only €80k less than his predecessor Patrick Kennedy was earning when he hung up his spurs last New Year’s Eve.

Paddy also confirmed the official demise of its social gaming offshoot Betdash, its Paddy Power In-Play real-money Facebook app and its Roller mobile casino. Paddy offered a short mass eulogy. “Inevitably, innovative ideas won’t all work, and in this context, we have decided to discontinue our secondary products and brands.”

On a more positive note, Paddy enjoyed record betting turnover of €7b last year, a 16% gain over 2013. Revenue rose 18% to €881.6m, only slightly less than the sum Paddy plans to return to shareholders in the form of dividends over the next few years, pending shareholder approval at Paddy’s annual general meeting next month.

Paddy might want to hold off on making it rain, given that Ireland’s new point-of-consumption regime now has an official starting date. The Irish government announced this week that their new POCT would take effect Aug. 1, after which all Irish-facing online operators will pay a 1% turnover tax – or 15% of betting exchange revenue – on all wagers taken from Irish punters.

Paddy previously estimated that the Irish turnover tax would have trimmed €8m off its bottom line had the measure been in force last year. Paddy is also looking at a full year of 15% tax on its UK punters as well as new value added taxes on electronically supplied services in European Union member states (including Ireland) that took effect Jan. 1. (Working title of next year’s annual report: “The Year Paddy Power Was Sodomized by Regulators.”)

The Irish government officially invited online operators to apply for new betting licenses on Wednesday (16). However, any operators wishing to be considered for Irish licenses will first have to pass a new “personal fitness” test, which has nothing to do with any Crossfit workout. Instead, Irish police are asking all operators to turn their heads and cough before proceeding to the license application phase.

Assuming approval is forthcoming, the new licenses will cost €10k and will be valid for a period of two years. Operators who continue to take wagers from Irish punters without a new license are subject to fines of up to €150k for a first offense, rising to €300k for repeat offenders.