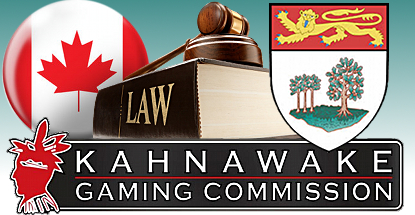 The Kahnawake Gaming Commission (KGC) has appointed Mark Jocks as its new chairman for a one-year term.

Jocks assumed his role following the departure of former KGC chairman Dean Montour, who stepped down on March 31 after seven years on the job. The Mohawk Council of Kahnawà:ke (MCK) thanked Montour for his years of service and wished him all the best in his future endeavors.

PEI ONLINE GAMING AMIBITONS SPARK LAWSUIT
Meanwhile, a $25m lawsuit was filed on Thursday in the Canadian province of Prince Edward Island (PEI) following a failed attempt by the local Mi’kmaq Confederacy to emulate their counterparts in Kahnawake. The lawsuit was filed by Capital Market Technologies (CMT), which is seeking compensation from the province over the failed attempt to make PEI a national regulatory hub for Canada’s online gambling industry.

As detailed by the Globe and Mail, the plan was originally hatched back in 2008 after PEI’s then finance minister Wes Sheridan released a report saying the province’s gambling revenue streams were under threat from the rapid growth of online gambling. A year later, Mi’kmaq legal counsel Don MacKenzie proposed setting up online gambling infrastructure on the local Scotchfort reserve.

In 2010, the province and tribal representatives formed a ‘gaming committee’ with Charlottetown law firm McInnes Cooper to study the issue. The province funded the committee’s work via a $950k loan to the Mi’kmaq Confederacy that would be paid out of future online revenue.

Enter CMT, which held a one-third stake in Simplex, a UK firm that was looking to establish a North American hub for its global financial transaction platform. The Mi’kmaq paid Simplex $60k to produce a report on the province’s egaming options.

In 2011, Simplex delivered its report, which laid out two possible scenarios. The first option involved PEI setting up its own provincial online regulatory hub and recruiting other provinces to join in exchange for a cut of the revenue.

The second option would mimic the Kahnawake approach of asserting tribal sovereignty to override the restrictions of Canada’s Criminal Code. But PEI would add a twist in that the province would be a formal partner of the tribal egaming hub, thereby offering an extra layer of governmental legitimacy that PEI hoped would appeal to international online gambling firms.

Things went sour after the government got wind that CMT principals were distributing the Simplex report as a means of luring investors into taking stakes in CMT. By February 2012, the province backed out of the project based on its belief that Simplex’s option A was unrealistic and option B was legally uncertain.

By 2013, the province had accused CMT of selling stock without having registered on the island, marking the first formal securities case in PEI history. The privately held CMT argued that it had been dealing in convertible loans, not shares, so no registration was required. Eventually, CMT caved, agreeing to pay a $10k fine for late filing and for selling to unaccredited investors.

The kerfuffle was first mentioned in PEI’s legislature in May 2013, when Sheridan denied paying any money for the Simplex report. Both Sheridan and then-Premier Robert Ghiz retired from politics before the year was out.

The lawsuit filed Thursday accuses Sheridan and a host of other PEI pols and support staff of spreading falsehoods intended to undermine CMT. The province has filed papers refuting these claims, saying it only ever dealt directly with Simplex CEO Philip Walsh on the egaming issue.

All but two of Canada’s provinces have since launched province-specific online gambling sites. In a highly controversial move, the province of Quebec has proposed instituting IP-blocking of “illegal” operators in order to boost revenue at Loto-Quebec’s struggling Espace-jeux online site.

Quebec is trying to get other provinces onboard with the IP-blocking plan but a countrywide scheme would require federal politicians to amend the Criminal Code. Canada’s federal gambling laws don’t explicitly block international online gambling sites from serving Canadian punters, provided those operators don’t base their technology or management on Canadian soil.