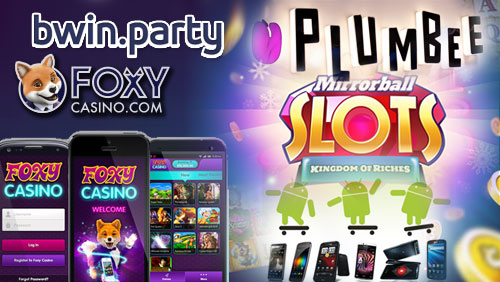 Foxy Casino will also use the popular Foxy Bingo character and Foxy brand to promote its services in the UK.

“In bringing a defined casino offer to the market, we wanted to ensure we drew on the popularity of Foxy and leveraged the recognition and trust the UK’s leading bingo brand has in such a crowded marketplace,” said Foxy Bingo Head of Marketing Daniel Mahon.

“We have made a commitment to being mobile-first and we are proud to be launching one of the richest mobile casino products out there.  We look forward to seeing how current Foxy fans and the existing casino market view the product,” Mahon added.

bwin.party has also launched a dedicated iOS app and browser app alongside its PC and Mac variants.

The launch of the Android app reveals Plumbee’s commitment to offering innovative, social and entertaining digital casino experiences to players across all platforms.

“Players who know our Mirrorball Slots app on Facebook have been eagerly awaiting the Android version of the game,” said Co-founder and CPO Gerald Tan.

“We’ve been working really hard to bring it to them and we’re really delighted that it’s now live. We’ve taken the same principles—super fun and engaging games, great graphics and lots of extras to reward the players—as we have on our iOS and Facebook games, and we think Android players are going to love it,” Tan added.