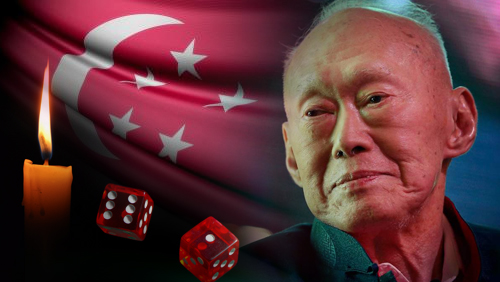 Lee Kuan Yew, considered the founding father of Singapore, was a loved and well-respected man in his country. Over the weekend, those emotions came pouring out as the country formally held funeral services for its departed pioneer.

Respectful tributes were made throughout Singapore, even extending to the country’s two casinos – Resorts World Sentosa and Marina Bay Sands – both of which closed operations from 2 pm to 6 pm on Sunday to pay their respects to Lee.

Resorts World Sentosa also asked its staff to wear somber colors on the day of the state funeral. The operator canceled its Crane Dance and Lake of Dreams night shows from March 23 to March 31 while also suspending most business operations in other attractions from 2 pm to 2:05 pm on Sunday.

“Together with the rest of the nation, we mourn the loss of a great leader. We apologize for any inconvenience caused,” Resorts World Sentosa said on its website last week.

Marina Bay Sands also suspended “Wonder Full,” its own light and water show for the entirety of last week as a mark of respect for Lee.

Earlier last week, local satire website New Nation posted an article calling for the two casinos to shut down on Sunday but a spokesman for Resorts World Sentosa told the Straits Times that the decision to close down operations for four hours was made “before we were aware of the New Nation article or petition.”

Singapore Pools, the country’s sole authorized provider of lottery products, also paid its own form of respect to Lee when it closed down all off its branches, retail outlets and Livewire venues. Account services also went dark throughout the day, although a 4D draw did go on as scheduled at 6:30 pm on Sunday.

The passing of Lee Kuan Yew is a devastating blow to the national identity of Singapore.

On behalf of everyone at CalvinAyre.com, I’d like to extend our sincerest sympathies to the people of Singapore over their founding father’s passing.