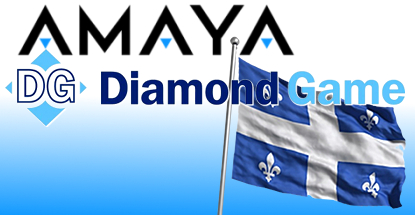 Canada’s Amaya Gaming has taken the first step in its plan to divest itself of its B2B assets by spinning off its Diamond Game lottery division.

Amaya acquired the Los Angeles-based Diamond Game Enterprises – which operates 2,100 instant ticket vending machines in 15 jurisdictions in North America – in 2013 for $25m. On Thursday, Amaya announced it would spin off Diamond Game via a public float on the Toronto Stock Exchange.

Amaya has created a new division, Innova Gaming Group, that will hold all shares in Diamond Game. Amaya declined to offer expectations for how much money it intends to gain via the initial public offering. Whatever sum it raises, Amaya plans to use the proceeds to pay down debt and/or repurchase its own shares.

Meanwhile, Amaya has issued a statement addressing the province of Quebec’s plans to introduce some form of licensing regime for private online gambling operators. The plans, outlined in Quebec’s 2015-16 budget statement, also call for internet service providers to IP-block other “illegal” gambling sites so as to boost the fortunes of Loto-Quebec’s online site Espace-jeux.

On Friday, Amaya spokesman Eric Hollreiser said Amaya was happy to see Quebec “seeking ways to work with the private sector to contribute to Loto-Quebec’s growth in online gaming.” For years now, Amaya has been Loto-Quebec’s technology partner and Amaya “would happily expand its existing partnership … to go through the necessary process to become an online solutions supplier accredited by Loto-Quebec and to help define the future online gaming guidelines.”

There’s been much speculation as to what form Amaya/Stars’ new role in Quebec might be. Would Stars be allowed to operate in Quebec under its own standalone site or does the phrase “online solutions supplier” suggest that Stars would offer its online poker operation via the poker tab on the Loto-Quebec site? Either way, would Canadian players continue to have access to Stars’ global liquidity?

Amaya is due to announce its Q4 and FY 2014 results on Tuesday. Amaya CEO David Baazov has traditionally been careful not to get too far ahead of public statements by regulators in the markets in which Amaya/Stars operates so, sadly, don’t expect too much in the way of clarity on the Quebec situation.