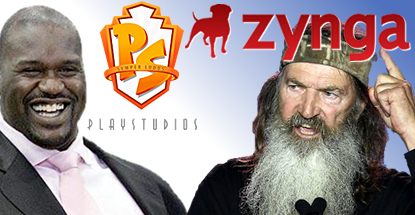 On Thursday, Playstudios CEO Andrew Pascal announced the release of two new social casino titles developed in partnership with O’Neal. CaddyShaq is a slots-based game featuring the occasional detour into a game of golf at the Shaqusta Country Club, where (just like the movie) Bucky the Gopher is hell bent on messing with your balls.

The second title is ShaqJack, a blackjack variant featuring basketball-themed layouts in lieu of the traditional green-felt table. Both games are currently available on Facebook, as well as on Google Play, iOS and Amazon.

As with myVEGAS, players earn online points that can be redeemed for non-gaming amenities at MGM properties, Royal Caribbean International and other Playstudios partners. Players can also win autographed CaddyShaq t-shirts and basketball jerseys, floor seats at a Sacramento Kings game and even a chance to go one-on-one with the big man himself at his home court. (Your best bet to beat him? Stick to free throws.)

Pascal said Playstudios had worked closely with Shaq to ensure they’d “captured the essence of his personality” in the two new titles. Shaq, who claims to be a fan of myVEGAS, said “once players see the games, they are going to have some fun.”

ZYNGA SHUTS DOWN DUCK DYNASTY SLOT
While Playstudios launches new games, struggling social gamers Zynga are shutting down six of their titles. As of April 30, fans of Zynga Slots will have to switch to other titles in the Zynga Casino franchise. Zynga said it doesn’t “take the decision to sunset our games lightly” but the closure was necessary “so our team of game makers can put their passion, energy and time to developing other content for you.” Zynga Slots players have been offered “a special coin gift” for transferring their affections to the company’s Hit It Rich! or Wizard of Oz Slots.

Five other titles are on Zynga’s chopping block, including slots title Riches of Olympus, Pioneer Trail (formerly FrontierVille), Ayakashi: Ghost Guild, FarmVillage and Duck Dynasty Slots. The latter title, based on the A&E television series, was controversial from the start due to patriarch Phil Robertson‘s stated belief that homosexuality is on par with bestiality and that AIDS sufferers were being punished for their immorality.