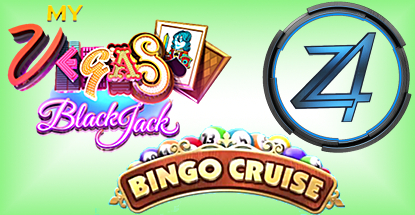 Playstudios has expanded the scope of its popular MyVegas social casino app by adding blackjack to its existing slots offering. MyVegas is a partnership between Playstudios and casino operator MGM Resorts, which links MyVegas play to its customer rewards program, allowing app players to earn points than can be redeemed for non-gaming amenities at MGM’s brick-and-mortar properties (and now Station Casinos, as well).

Playstudios CEO Andrew Pascal acknowledged that social gamers have been slow to embrace other free-play blackjack apps but believes this merely presented the opportunity to develop “a category-defining product.” MyVegas Blackjack players can choose between a variety of themes related to MGM’s casino brands, including Aria, MGM Grand and New York-New York. The app is available for iOS, Android and Amazon devices and points earned via the slots app will be honored at MyVegas’ new blackjack tables.

OpenWager Inc. have teamed with USA Today to launch a social bingo product with a cruise ship theme. USA Today Bingo Cruise launched on Thursday on Android and iOS platforms and offers “an immersive 3D gameplay experience.” (Helphful hint: when your theme involves floating on water, the word ‘immersive’ suggests players will soon be below the water line. Just sayin’.) OpenWager claims the game has a “compelling storyline” that allows players to visit various exotic ports of call without risking exposure to the Norwalk virus.

Nevada startup Z4 is tossing its hat into the not-at-all-crowded social poker ring. Z4’s Matt Kaufmann told PokerFuse that the company’s bespoke HDPoker product would launch in beta mode on Facebook within the next month, offering Texas Hold’em to start and PLO options planned for the near future. Z4, which was created by the owners of the Siena Hotel Spa Casino in Reno, is also a Nevada-licensed service provider and has ambitions to join the state’s real-money online poker operators. Kaufmann suggested a real-money launch could be up to a year down the road.

Finally, proof that the social games sector isn’t all gravy came after Angry Birds developer Rovio Entertainment announced it was laying off 16% of its workforce – 130 angry humans – in order to “simplify” its business. Rovio CEO Mikael Hed admitted his company had been “building our team on assumptions of faster growth than have materialized.” No doubt the news has elicited some schadenfreude over at Zynga, whose own products dipped in popularity after Angry Birds usurped Farmville as the new social kid in town. Next!