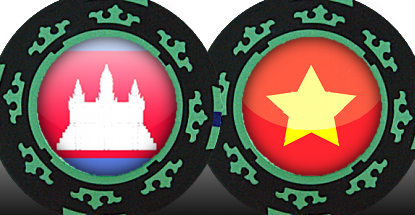 Cambodia’s casino market is set to welcome three new additions in the southwest province of Takeo.

On Wednesday, Ministry of Economy and Finance official Ros Phearun confirmed that three new gaming joints would open in Takeo’s Kiri Vong district in Phong Den village. The Phnom Penh Post quoted Phearun saying two of the casinos had already completed construction and were awaiting licenses, while the third had yet to begin construction. Phearun declined to specify the identities of the casino operators, saying only that they were locally owned.

The two completed casinos are hoping to open their doors in April before the Khmer New Year celebrations kick off mid-month. The establishments will rely on a steady stream of gamblers from neighboring Vietnam, which already supplies most of the patrons to Takeo’s two existing casinos. Cambodian residents are legally prohibited from entering its country’s casinos although the government has publicly mused about relaxing this restriction.

The additions will bring Cambodia’s casino complement to 62, most of which are small-scale affairs situated in towns along the borders of Vietnam and Thailand. The only exception is NagaCorp’s NagaWorld, which is located in the heart of Cambodia’s capital Phnom Penh.

Not everyone is kicking up their heels in anticipation of more casinos. Son Chhay, a member of the opposition Cambodia National Rescue Party, said the government shouldn’t be issuing more casino licenses until it gets around to passing new gaming legislation. Chhay believes the government’s current share of casino tax revenue – $25m in 2014 – is too low and foreign control over the casino industry is too great. “We shouldn’t encourage an industry that doesn’t benefit to the country like this.”