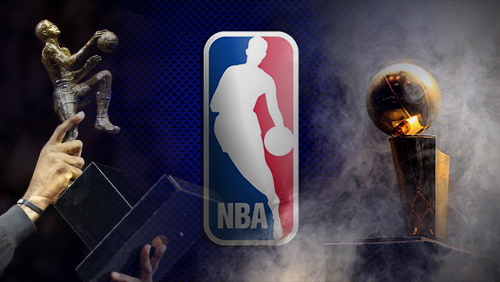 We’re still a couple of days away from the start of the second half of the NBA season. You now what all this idle time means, right?

Yep, it’s time to roll out my not-so-annual preview of what lies ahead for the NBA, complete with odds info on who goes to the Finals, who wins MVP, who makes the playoffs, and which blog Dan Gilbert will bully next. I only made up one of those so I’ll leave it to you to guess which one doesn’t really have odds attached to it, even though there should be probably be a way to bet on it.

In any case, the most intriguing thing about the remainder of the 2014-2015 NBA season is the fact that there doesn’t appear to be any clear-cut favorite to win the title. It’s not like in year’s past when you have two teams that are so above the fray that their odds are dramatically lower than the rest of the contenders.

This season, it’s all bunched up with the Golden State Warriors and the Cleveland Cavaliers posting the shortest odds at 9/2. In fact, five teams have single-digit odds right now, including the San Antonio Spurs at 13/2, the Atlanta Hawks at 7/1, and the Chicago Bulls at 17/2.

Not too far behind are a handful of teams with 14/1 odds, 18/1 odds, and 20/1 odds. All this should tell you one thing: there’s a lot of value here, especially from contenders with double-digit odds like, you know, the Oklahoma City Thunder at 11/1 odds. If the Thunder somehow makes it to the playoffs as the eight seed, you can’t tell me that the Golden State Warriors aren’t sweating that match up.

The same can be said in the Eastern Conference where the Indiana Pacers could be a dark horse if Paul George somehow makes a successful comeback and pulls them into the playoffs. You think the Hawks aren’t worried about that match up? Oh, and the Pacers are currently 150/1 to win the title. Food for thought, right?

Outside of the title odds, the other NBA prop bet that I consider a favorite is the Regular Season MVP. From the looks of things, there’s really only four viable nominees at this stage in the season. Stephen Curry is the short favorite at 5/6 odds with James Harden and LeBron James not too far behind at 6/4 and 11/4 odds, respectively.

But let’s just say that he does bring the Pelicans to the playoffs while posting the highest PER in NBA history. That’s an MVP in my mind, which is why those 9/1 odds are looking pretty enticing right about now.