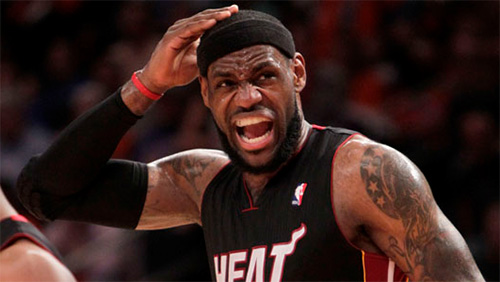 LeBron James is widely considered the best basketball player in the world today. Oddsmakers always take that into the equation, especially when determining the prices for all 30 teams in the NBA. But Carbonsports.ag ventured into a different kind of exercises, piecing together what the odds of each NBA team will if it had LeBron James on its roster.

Taking into account, the belief that LeBron is returning to the Miami Heat, the site posted the same 7/2 odds on the Heat, making them the favorite to win the 2015 NBA title. But outside of the Heat, all other 29 teams obviously improved their odds to win the title with LeBron James in their lineup.

Postulate a world where LeBron James is teammates with Kevin Durant and Russell Westbrook for the Oklahoma City Thunder. You’d be silly not to take up the odds of that team winning a championship. But that’s the prevailing thought because a Big Three of three of the ten best players in the world justifies the 8/5 odds (down from 7/1) being priced on that partnership.

Another surprising team is the Indiana Pacers, which saw their odds jump from 20/1 to 5/2, shorter than what Miami is getting now with James still penciled in as a Heat. James as a Pacer would make for an incredibly suffocating perimeter defense with Paul George returning back to his regular two-guard position. It’s not exactly on the level of Jordan-Pippen but it’s going to be pretty damn close.

If LeBron decides to play for the Chicago Bulls, you can almost bet with absolute certainty that comparisons to Michael Jordan will eventually arise. Outside of that, a starting five with LeBron, Derrick Rose, Jimmy Butler, Taj Gibson and Joachim Noah is about as lethal a defensive lineup as you can get, enough at least for odds to shift from 10/1 to 3/1. Think anyone can score 80 on those guys?

How about LeBron as a member of the San Antonio Spurs? Kawhi Leonard’s firmly entrenched as the small forward of the Spurs but LeBron really is a positionless player, capable of playing one to five with the ease befitting his kind of elite versatility. The defending champs are currently 6/1 to repeat but those odds would jump to 4/1 if LeBron decides to don the silver and black.

Another team with championship aspirations that instantly becomes the favorite is the LA Clippers. It’s going to be tough having another ball-dominant superstar in Chris Paul in the mix but the combination of LeBron, Doc Rivers and the team’s overall talent was enough to see their odds jump from 10/1 to 4/1.

The Golden State Warriors and the Washington Wizards are two other teams who get huge boost in odds should the four-time MVP take his talents to play for them. We can only imagine what a Steph Curry—LeBron James partnership would look like. Trust us when we tell you, the rest of the league won’t like it. Same goes for a Big Three of LeBron, John Wall, and Bradley Beal. That’s probably why both teams would be 5/1 odds to win the title with King James in the mix, as opposed to 25/1 and 40/1, respectively with their current lineups.

Any LeBron James free agency article won’t be complete without mentioning a potential return to the Cleveland Cavaliers. This current Cavs roster may be flawed now but it has all the requisite pieces to be a contender if James does find his way home. Kyrie Irving is there. Andrew Wiggins just arrived. And don’t forget about the other young pieces like Dion Waiters, Tristan Thompson and Anthony Bennett. With LeBron returning to wear the wine and gold, the Cavs’ title odds skyrocket from 50/1 to 6/1.

And finally, for the fun on completing this what-if exercise, the Philadelphia 76ers would see their odds improve from 200/1 without LeBron to 20/1 with him. Still not the favorites but it just goes to show the kind of impact the four-time MVP has on any team, let alone the worst in the NBA.