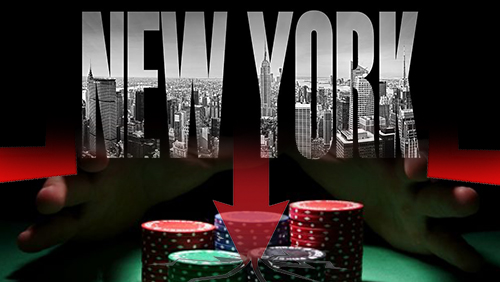 Gambling sales in the state of New York in 2014 experienced its first decline in years, prompting concern that the state’s decision to award three casino licenses could end up becoming a bad investment.

According to data provided by the State Lottery, gambling sales in the Empire State totalled $9 billion in 2014, a 2% decline from the $9.03 billion the state received in 2013.

The decline in sales affected a handful of industries, including the lottery and the state’s race track casinos. Traditional lottery games, which account for a majority of gambling sales in the state, dipped 2.2% to $7.2 billion. Betting sales from multi-state big jackpot games Powerball and Mega Millions plummeted 43.5% and 11.8%, respectively.

The only lottery gains came from scratch-off instant games, but its $3.7 billion in sales represented an increase of less than 1%.

As far as the state’s nine racetrack casinos are concerned, only two of the nine racinos posted improved revenues in 2014 compared to 2013.

The biggest winner in this proverbial revenue race is Resorts World at Aqueduct Racetrack in Queens. The long-standing pace-setter saw its revenue improve by 2.9% to $808 million. The only other racino to post improved revenue was the upstate Batavia Downs.

All the others, though, weren’t so lucky. One racino at Yonkers Raceway experienced a revenue drop of 4% to $537.5 million.