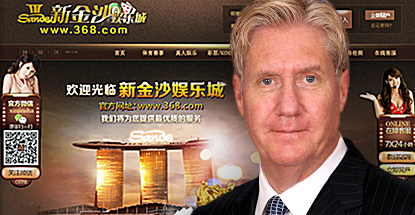 A federal court in Nevada has awarded casino operator Las Vegas Sands a $2m default judgment against online gambling operators caught infringing on Sands’ trademarks. Last June, Sands filed trademark infringement suits in Nevada against the unknown operators of 35 online domains that were making liberal and unauthorized use of the Sands logo, Chinese characters that translate to ‘golden sands’ and images of the Marina Bay Sands casino in Singapore.

In his Jan. 14 ruling, US District Judge James Mahan awarded Sands $2m in damages and issued a permanent injunction barring the online operators from using the trademarks. All well and good but until the operators are identified, collecting the damages and enforcing the injunction will be akin to capturing a rainbow in a jar.

Sands is far from alone in having its intellectual property used without its permission. Last August, Macau casino operator Galaxy Entertainment Group warned the public about “bogus lookalike” online gambling sites utilizing its trademarks. A couple years prior, Caesars Entertainment lost a domain squabble with a Bangkok massage parlor that had the foresight to register the domains before Caesars did. But the Sands infringement was particularly ironic, given the anti-online gambling jihad currently being waged by Sands chairman Sheldon Adelson.

In other Sands news, the company announced that Sands China president and CEO Ed Tracy (pictured) will step down from his post effective March 6. Tracy, who ranked ninth on the most recent Inside Asian Gaming chart of the industry’s biggest movers and shakers, is said to be ‘retiring’ but will continue to work with Sands as a consultant and will assist management during the transition to new leadership.

Tracy assumed Sands China’s reins following the 2010 dismissal of Steve Jacobs, who has been waging a legal battle over his ouster ever since. An unidentified gaming analyst told Gambling Compliance that Tracy was invaluable at restoring frayed relations between Sands, Macau and Beijing. Tracy’s exit follows Sands COO Mike Leven, who left the company at the end of 2014. The two execs timed their exits to coincide with Macau’s worst revenue slump since the 2008 global economic meltdown. Well played, sirs.