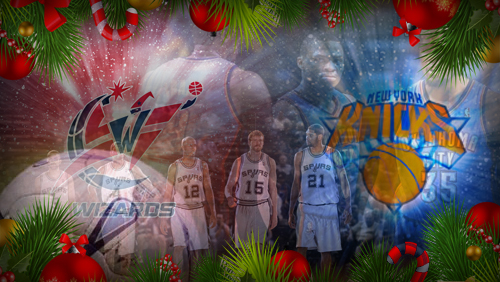 The Christmas holidays. Ahh, yes. It’s the most beautiful time of the year for a lot of reasons, not the least of which is unimpeded opportunities to enjoy watching sports. Unfortunately, not every league plays during Christmas so we’ll all have to make-do with what’s available. Fortunately, one such league is the NBA, which is always in the forefront of the Christmas sports-watching experience. So if you’re itching to get some bets up while you’re on your Christmas holiday, peruse this handy schedule guide to see what games are playing on what day and if they’re even worth your time and money.

Over the past years, the NBA has dominated the Christmas day sports watching scene. This year won’t be any different as the NBA has scheduled five games on December 25, all playing one after the other. Just goes to show you how much the league wants you to spend time on your couch watching these games on the 25th.

The action begins with the Washington Wizards taking on the New York Knicks (12:00 pm ET). That would’ve been a good game if the Knicks are actually good this year. They’re not. Well, a least you can take comfort knowing that the next game between the Oklahoma City Thunder and the San Antonio Spurs (2:30 pm ET) has the potential to be a doozy…if Kevin Durant plays. Once these two games are down, one of the season’s most eagerly anticipated match ups takes center stage as LeBron James comes back to Miami for the first time since his returning to the Cavs (5:00 pm ET). That’s going to be a barnburner and a half. As soon as Heat-Cavs is finished, the action now turns to Chicago where the Bulls play host to Kobe Bryant and the Los Angeles Lakers (8:00 pm ET). Kobe Bryant vs Derrick Rose, anyone? When Bulls-Lakers is finished, the table is set for arguably the most exciting game of the day as Stephen Curry and the league-best Golden State Warriors travel to Los Angeles to take on Chris Paul and the LA Clippers (10:30 pm ET).

English football reigns in the holidays

A majority of Europe’s five major domestic leagues have begun their annual holiday breaks. The Spanish La Liga, the Italian Serie A, and the French Ligue 1 have shut down until the early part of January while the German Bundesliga isn’t expected to resume action until January 31, 2015. The only exception is the Engish Premier League, which has taken an ownership role of playing throughout the Christmas season.

There aren’t any games on Dec. 25 per se, but the EPL has a full schedule on Boxing Day, December 26, including matches between Chelsea and West Ham, Manchester United and Newcastle United, and West Brom and Manchester City. It’s not just the EPL that will be playing on that day. Even the English Championship, League One, League Two, and the Vanarama Conference are all packed with plenty of intriguing games.

If that’s not enough English football to keep you company throughout the holidays, all the top leagues, led by the EPL, will reconvene two days later on December 28 for another action-packed schedule led by a juicy match between Manchester United and Tottenham Spurs.

If you’re pining to get your fill of some pigskin action, you can satiate your craving by checking out a handful of games, including two on December 25: the Popeyes Bahamas Bowl between Western Kentucky and Central Michigan and the Hawaii Bowl between Rice and Fresno State.

On December 28, more bowl games are scheduled, including two games with nationally ranked teams playing in them. The action kicks off with the Military Bowl between Cincinnati and Virginia Tech, followed by the Sun Bowl between 15th ranked Arizona State and Duke. You’ll also get the treat of seeing Miami take on South Carolina in the Independence Bowl, Boston College and Penn State in the Pinstripe Bowl, and Nebraska taking on 24th ranked USC in the Holiday Bowl.

Other sports worth remembering

These sports don’t get the same amount of shine as basketball, football, or football (the American kind). But just so everyone’s informed, the PDC World Darts Championship is currently on-going and will run until January 1, 2015. Depending on where you are, there should also be some horse racing events scheduled for the holidays.