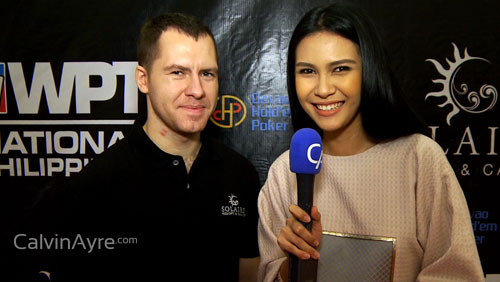 Angelia Ong talks to one of the most successful online poker player, “The Jungleman” Daniel Cates. He shares what he is up to on poker these days.

Daniel Cates also known as jungleman12 or w00ki3z. is a professional online poker player from the USA, considered to be one of the best heads-up No Limit Texas Hold ’em players in the world.
What are you up these days?

“I’m doing somne online poker but not exactly hold’em. playing some mixed games and stuff and i got a lot of success on things that aren’t holdem this year so that’s pretty cool. and i’m doing some other thing business-related on the side as well. But right now, i’m taking a break from all of that to play poker in the Philippines.”

It’s been more than three years since Tom “durrrr” Dwan and Daniel “jungleman12” Cates began their “Durrrr Challenge II.” The two high-stakes legends completed almost 20,000 of the proposed 50,000 hands in 2011 before the challenge hit a stand-still on Black Friday.

During those sessions Cates beat Dwan for over $1.25 million. Cates is enjoying a huge lead now but with communication between the two worse than ever, he’s not confident the challenge will ever get finished.

“There is no update. Tom is completely not putting any effort to get it done. there’s nothing else to say. It’s extremely difficult,” Cates said.

” I think i should behave myself a little bit more. I normally do. I was just really mad at the particular tournament because it absolutely at my way.”

Players he don’t wan’t to be an opponent; his say on Phil Ivey as the greatest poker player ever

I think Isaac Haxton is quite good in general at all the things he does. I don’t really want to play against him. Daniel Colman has been crushing; he’s a friend of mine. He’s a very good player.”

Cates on Phil Ivey as the greatest poker player ever