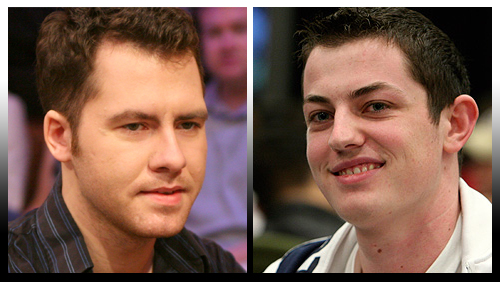 The original 2009 Durrrr Challenge – 50,000 hands of heads-up, high-stakes no-limit hold’em or pot-limit Omaha, played four tables at a time online, with a $1.5 million bonus for an opponent who could come out ahead of him over that span – was something Tom Dwan issued to generate action. He got plenty of it early on from Patrik Antonius, but the Finn lost interest after numerous delays (and a $2 million deficit after 39,000 hands). Dan “jungleman12” Cates was the next to accepted the challenge, in 2010, but when the last session the two played came to an end they were just 39 percent through the required hands and Cates was already ahead by more than $1.25 million.

From there the challenge went into limbo, but last month Cates announced that mediators had been engaged and a new agreement to continue the challenge was in place. The new terms included a requirement of 8,000 hands every two months. To enforce this rather low bar, a system of increasing penalties for not playing certain numbers of hands each two-month period, starting at $40,000 and moving up by $10,000 with every additional every two months. Those sound like pretty good reasons to play, but Dwan recently earned his first penalty under the new agreement for failing to make himself available.

Cates is the one with a troll face on his 2+2 avatar, but Dwan is the one stringing the Jungleman along, refusing to settle the bet even though Cates says he’s willing. The top Google search for just about any poker player’s name is the one followed by the word “broke,” and a tweet Dwan sent in late September – mentioning in passing that he’d had his “biggest loss ever yesterday,” later rumored to be upward of $4 million – has at least some of the forum wags arguing he’s busto. It would explain his refusal to settle with Jungleman, they say. Never mind that such an explanation is far less interesting than the possibility that he’s rolled beyond anyone’s imagination and the penalties that everyone seems to think are so expensive are really just chump change to him. Imagination doesn’t enter into it. They want to bring the legend back to earth and reveal him to be human just like the rest of us.

Even if he were to make a public admission that he’s broke, though, or settle the bet with Cates or take any other course of action that people seem to want from him, poker players and observers would still find reasons to talk about durrrr. He has a mystique like very few in the game’s history. Even among a generation of pros who got their start online with small stakes, his story is unique: he legendarily never made a deposit, instead running a $50 stake given to him as a birthday present up into a bankroll. He took Cirque du Soleil founder Guy Laliberté for millions online, profits that in turn have sustained him online against the likes of Phil Ivey, Gus Hansen, and Patrik Antonius and in Macau’s nosebleed-stakes live games with Asia’s high rollers. He once had 20 times as much riding on side bets when he was heads-up for a WSOP bracelet than he could have won in the tournament, only to save the high-stakes poker economy from crashing to a halt by finishing second to an unknown player from New Zealand.

Everything seems to have come easily to him. He’s the outlier that everyone who sits down to the table thinks they could be if everything went just right, regardless of the fact that he plays on a separate level from almost everyone who’s ever flung cards or chips around a table. This is partly because he built his reputation as a cash game player. Tournament specialists have a resume of results that speaks for them, and cameras on them whenever they’re within striking distance of a big score. Those who focus on cash play a purer form of the game and go about their business completely differently. They don’t have to contend with cameras recording their every move, and they don’t do a lot of self- reporting on their results; even when they do it’s reasonable to wonder whether they’re talking up their wins and sweeping their losses under the rug.

Once upon a time the bulk of Tom Dwan’s action was out in public thanks to tracking sites that watched all the high-stakes online tables. His appearances on High Stakes Poker have become mythic. But the young man who made waves as the internet watched is now a little bit older and plying his trade away from the spotlight. Since Black Friday he’s spent a lot of time in distant Macau, where the only news of his exploits comes from anonymous sources who have supposedly watched the games or, occasionally, a tidbit like that revealing tweet directly from Dwan himself. Even then there wasn’t any real information – just enough to keep everybody wondering.

At the end of the day, two things make durrrr matter to poker. First, everyone has an idea of how much he has won but nobody knows just how much he’s lost. And second, he doesn’t appear to have the slightest care whether anyone ever finds out. Whether you respect him for it, despise him, find amusement in his aloofness, or just want to know the truth because you love a good story, it’s all the same to him.