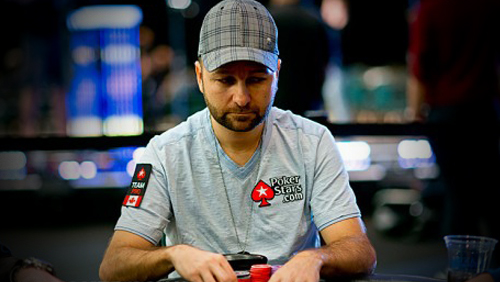 Daniel Negreanu won another World Series of Poker bracelet in convincing fashion last night, locking it up by coming back from eighth in chips at the final table to win the WSOP Europe High Roller event and €725,000. It was his second bracelet win of the year, following his Main Event win in Australia at the inaugural WSOP Asia-Pacific, and the sixth overall in his career. The victory also gave him a lock on the 2013 WSOP Player of the Year award, avoiding a last-minute showdown for the award like Phil Hellmuth had last year when he lost out to WSOP Main Event winner Greg Merson, who was in a must-win situation. Negreanu, the first-ever WSOP POY winner back in 2004, also became the first player ever to win that award twice.

With the victory Negreanu tied three players (Jay Heimowitz, T.J. Cloutier, and Layne Flack) for ninth place on the all-time WSOP bracelet winners list, and he moved to within one bracelet of Billy Baxter and Men “The Master” Nguyen and two of Erik Seidel. He also climbed to third place on the all-time money list with $19.51 million, moving ahead of Seidel ($18.62 million) and closing in on Sam Trickett ($19.87 million). If you exclude tournaments with buy-ins greater than $50K, Negreanu ($17.37 million) is the all-time leader over Phil Hellmuth by more than $2 million.

Much is being made right now of Negreanu becoming the first player to win gold bracelets at all three WSOP series (Vegas, APAC, Europe), and rightfully so, but it was nearly even more impressive. Back in July he made it to heads-up in the $2,500 2-7 Triple Draw event but eventually finished second; if he’d won that and the High Roller bracelet in Europe, he would have become the first player to win bracelets in all three series in the same calendar year, a feat that would have been arguably as difficult to match as Phil Hellmuth’s achievement of having won both the WSOP Main Event and the WSOP Europe Main Event. Even without winning the bracelet there he has more than $3.1 million in winnings this year, making it second only to his landmark 2004, when he won both the WSOP and World PokerTour POY awards, for the best year of his 16-year pro career.

The win does more than just make Daniel Negreanu the first repeat WSOP POY winner, boost his position on the all-time money list, or add to his bracelet total. It cements his status as one of the brightest of a generation that has now made a lasting mark on the WSOP and the game of poker in general. Negreanu and Phil Ivey came into the game in the late 1990s when it was beginning to grow but before the boom had hit. They clearly showed talent, winning multiple bracelets while still in their 20s against fields comprised of poker greats from the three previous decades. But talent can be fickle. Over the years these two demonstrated something much more important: staying power. That’s also known as “standing the test of time,” one of the criteria for induction into the Poker Hall of Fame.

At this point both Ivey and Negreanu should be locks for the Hall when they reach the minimum age of 40 − 2016 for Phil, and next year for Daniel. Neither has been embroiled in any scandals that have tainted their reputations. Ivey is one of just a handful of players ever to win three bracelets in one year; he’s tied with Johnny Moss for fourth on the all-time bracelet list, behind just Phil Hellmuth, Doyle Brunson, and Johnny Chan; and he’s a consistent winner in the world’s biggest cash games. Negreanu is known less for his big cash game chops than Ivey (though he’s regularly played high-stakes mixed games in Bobby’s Room in the past), but besides Ivey and Seidel, Phil Hellmuth is the only other player with tournament results that truly compare. Before this spring his candidacy would have been pretty strong, but he hadn’t won a bracelet since 2008. His results this year confirm that he is undeniably one of the greatest tournament players of all-time.

Just about the only things left in poker for Negreanu to conquer are the WSOP Main Events in Vegas and Paris, and the bracelet totals of Hellmuth, Ivey, and Seidel. Given that those numbers are constantly moving targets, that the older generation of legends like Doyle Brunson and Johnny Chan are slowing down and unlikely to add significant numbers of bracelets to their totals, and that the brightest of the poker boom generation are sure to begin nipping at Kid Poker’s heels soon, it should be a lot of fun to watch the race for 20 bracelets unfold over the next decade.