Home / Poker / WSOP: Perrins Wins The Third British Bracelet of the Week and Elezra Swipes Gold Away From Negreanu 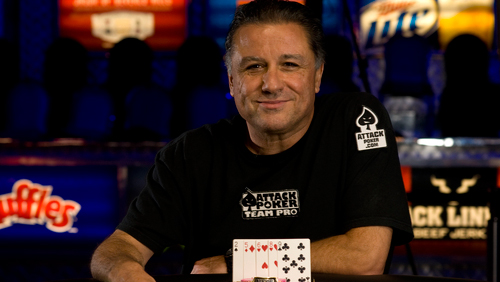 “Get in Matt Perrins, knew you could win a proper bracelet!”

booooooom ship it, so happy, thanks so much everyone for the support, especially those on the rail, means a lot, love you all

That was just one of the many congratulatory messages left on the Facebook wall of Matt ‘Pez’ Perrins after winning Event #57: $5,000 No-Limit Hold’em (NLHE). The message alludes to Perrin’s first WSOP bracelet, earned in 2011, after topping the field in the $1,500 No-Limit 2-7 Lowball event for $102,105. A game Perrins had never played prior to entering the competition.

Many of the games top players have been coming to the WSOP for donkey’s years, and have still not won a WSOP bracelet. Perrins now has two. Furthermore, it’s the third bracelet that has been won by English players in the past week. These things are just like buses.

“The 2-7 was just a bit of fun. To be honest it was a bit of a joke that I won it…but this means the world to me. I have come close on so many occasions but it’s finally happened to me and it’s unreal.” Perrins told the PokerNews sideline reporter Sarah Grant after his victory.

His first bracelet has been treated as a bit of a joke, and also as a sleight on the game of 2-7 that someone can win a bracelet in an event without understanding the rules. But I think that takes something away from the ability of the lad. Great poker players have great fundamentals and Perrins is proving, by his actions, that he is a great poker player.

Shoe Bomb: Definition – to take ones shoe off, fill it up with beer and drink the contents in one fell swoop.

The rail for the Perrins final was scintillating. It was a different mix than the one that spurred Barny Boatman on to success a few days ago. Younger, louder, shoe bombs aplenty and there was also competition with a huge following for the American Matt Berkey who finished in fifth place for $171,822.

$792,275 is one of the biggest prizes of the series and to be fair it was one of the toughest fields, making the victory all the more memorable for Perrins. The final nine players included two-time World Poker Tour (WPT) Champion Randal Flowers (7th), former WPT Player of the Year (POY) Joe Serock (8th), Matt Berkey (5th) and recent WSOP bracelet runner-up Seth Berger (3rd).

Perrins will be the first to admit that he had his fair share of good fortune, especially on the final table, where he eventually defeated Arthur Pro in heads-up action. Pro – ever the gentleman – spent the evening partying with Perrins and his friends.

“When there was 31 left at the end of Day Two I had a really good feeling that I would win. I just felt it.” Said Perrins.

Eli Elezra Stops Daniel Negreanu in His Tracks to Take Bracelet No.2

After Matthew Ashton took the top spot on the WSOP POY leader board, all eyes averted to Daniel Negreanu to see if he could muster a performance to steal it back; and boy did the Canadian come close.

It took an in-form Eli Elezra to stop Negreanu winning his second bracelet of this WSOP season in Event #59: $2,500 Limit 2-7 Triple Draw Lowball. It was a tough race for Elezra with one of the most stacked final tables of the series. David Chiu (4th), David ‘ODB’ Baker (5th), Scott Seiver (6th) and Michael Mizrachi (9th) creating quite a combination of talent.

“It was almost like our cash games at The Bellagio and the Aria.” Said Elezra after his heads-up victory over Negreanu.

Elezra’s victory, his second WSOP gold bracelet win, not only stopped Negreanu from winning a sixth WSOP bracelet, but it removed a great opportunity for Negreanu to make good on his bracelet bets. Something that Elezra can feel a certain empathy with.

“I feel sorry for Daniel. Him and Phil Ivey have some big bracelet bets…so sorry Daniel. Back when I won my first bracelet. I won $200k, but I won an additional $1 million in side bets after getting 10:1 from Barry Greenstein.” Said Elezra.

Elezra picked up $173,236 for this victory, in his third cash of the series from 17-events played.

The Brits are also running well as they look for their fourth bracelet in a little over a week. Roberto Romanello, who had a great Day Two finishing third in chip, currently has 680k, Scott O’Reilly has 650k and Gordon Huntly has 430k.

Event #60: $1,500 NLHE has steamrollered into its second day of action and Henry Lu leads the way with 272k. The Brooklyn boy is in a great spot to repeat his fantastic 2012 performance when he beat Neil Channing in heads-up action to capture his first WSOP gold bracelet in a $1,500.

One of the player’s favorite tournaments of the WSOP has reached its second day of action and Alexey Rybin has the chip lead. The Russian has never cashed in a WSOP event before but with nearly $900,000 up top, he has chosen a great event to make his first deep run.

386-players entered Event #61: $10,000 Pot-Limit Omaha (PLO) and at the time of writing 143-players remain, with Jonathan Duhamel the biggest name to breach the top ten followed by his PokerStars stable mate Nacho Barbero. But quite possibly the biggest star in the competition is the NBA’s Paul Pierce. The former Boston Celtics forward is currently hustling in the top end of the chip counts with 141,100.