Home / Poker / Life in the Middle of a British Rail 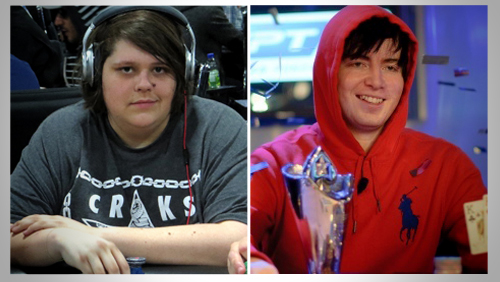 When Jason Duval and Jake Cody both made the final table of Event #34: $1,000 Turbo No-Limit Hold’em (NLHE), you didn’t need a degree in trigonometry to understand that there would be a need for some extra legroom on the rail. But for some reason it escaped the attention of the officials of the World Series of Poker (WSOP).

The cavernous center stage was playing host to the final table of Event #32: $5,000 NLHE Six-Max featuring Erick Lindgren, Jonathan Little and Lee Markholt; and the crowd was so sparse you could have sworn they were watching a Proclaimers gig. Meanwhile just a few yards away, the final table of the Turbo was squeezed into a tiny corner of the Amazon room and anyone watching had to jump into the can and cuddle up to the sardine next to them.

The front row seats were reserved for the ladies with Maria Ho and Vanessa Selbst showing a keen interest. There was food strewn all over the floor and boxes upon boxes of lager lying by the side of the middle row of chairs.

Within no time Jake Cody is all-in against Russell Crane. It’s Jacks for the boy wonder and eights for Crane. The Brits rise to their feet and start screaming, “Jackball! Jackball! Jackball!” There is a pause that lasts about a second, and you can here a solitary mouse like Crane fan murmur the words, ‘Eight ball!” It brings raucous laughter from the Brits and even more noise follows as the [9d] [6c] [5h] [Ts] [Qc] hit the board and Crane is eliminated in ninth place. Cody is the chip leader.

Richard Trigg is wearing his English shirt with pride, and stood next to him is Ash Mason fresh from his migration to Australia. When asked how he was finding life down under, he replied: “It will be a long time before I find friends like these.” But there wasn’t even a hint of belief in his words. You don’t find friends like these.

Toby Lewis is looking a little oiled, WSOP bracelet winners Matt Perrins and Craig McCorkell are standing next to Chris Moorman, Chris Brammer and Lil Dave Nicholson. The latter is embroiled in a conversation with Neil Channing who can’t stop laughing at the banter, despite telling me that he is in an awful mood.

Sam Grafton joins the party looking like a third member of Wham! He is wearing a suit jacket and white t-shirt. His trademark Elton John/Timmy Mallet style glasses hanging off the front of his nose. When Grafton arrives the party picks up. Smiles widen in anticipation of the comedy gold that’s about to roll out of Grafton’s mouth.

“I dressed like this because I knew there would be loads of girls in the crowd.” Said Grafton.” Hasn’t the boy wrapped it up yet? I thought this was supposed to be a Turbo…come one Jakey what’s the matter with you?”

“The Squid’s in the building.” Came a shout from the middle of the chairs.

“Well I couldn’t leave you with Moorman and Brammer for the chat could I.” Said Grafton.

“As anyone seen Sam Grafton?” Said a deadpan Channing.

Each person has their own individual role to play in this orchestra and Grafton is the conductor. He’s the man who puts it all together. They all have confidence, but Grafton is different. I guess he has been called that all of his life.

Channing has moved away from Lil Dave and is now exchanging bad beat stories with JP Kelly. Some of the boys in the rail are in little groups and others are clearly on their own…Channing fits into the latter bracket, as are a few of the Americans who have decided to join in the fun but are not quite sure how to get involved with British wit and sarcasm. I wonder if they had rails like this when Channing was a young kid?

Cody looks sharp. There’s something about him that makes him fit so naturally into the role of superstar. He’s wearing a bright red-shirt that doesn’t contain a single crease. Unusual for poker players, who believe that irons are just things you find in golf bags. He looks serious, composed and cut throat. He spends his time watching the action with an occasional look at his phone. The rail might as well not be there. He is completely in the zone.

James Dempsey and John Eames join the party and Perrins produces four Vodka Red Bulls with the elegance of Dynamo the Magician, just as Cody opens to 32k from the button. Michael Gathy three-bets from the small blind, Cody puts in a fourth bet, Gathy moves all-in and Cody snap calls. Everyone is on their feet and the confusion begins as the rail tries to fathom out who has what. It’s ace-king for Cody and pocket tens for Gathy.

The noise is deafening and suddenly the TV monitor goes blank and we can’t see the flop. It was only a few seconds, but it seemed like minutes. When the screen blinked back on, a sigh flew into the rafters as a ten on the flop effectively ended the hand. By the turn it was all over and everyone sat back in their seats and took another swig of lager.

“Ever the showman that Cody…deliberately losing to create some excitement.” Shouted Grafton.

Red Bull Robbie signifies to the crowd that his shift is at an end and tells them to be kind to the new man with the mic.

The new guy waved and everyone cheered before someone shouted, ‘Get on with your job!” The new guy didn’t know if they were taking the piss or not…he never waved again. The rail then focused their attention on the dealer, who looked uncannily like John “Skallie” Kalmar.

Toby Lewis was laughing so much I thought he was going to choke to death. Then Artem Litvinov walks through the rail. He’s clapping his hands and shouting, “Cody…Cody…Cody.” His Russian accent makes it sound hilarious.

Litvinov claps…not quite understanding what his role in this orchestra is and Ivan Demidov decides it’s wiser to sneak out the back way.

“Look I know the lad isn’t that bright…but a clap…we asked for a wave son.” Said Grafton.

Noah Vaillancourt is another player who has been taken into the bosom of the British Rail. He moves all-in with [Ac] [5s] and Benjamin Reason calls with [Kc] [Qh]. Once again the crowd get to their feet and start baying for an ace. There are smiles on everyone’s face. This is it. This is what it’s all about. This is exactly how poker should be.

Then suddenly it changes.

“If you are not sitting then you have to leave.” Says the security guard.

Everyone who was standing sits down on the lap of someone else in the seats. It’s a hysterical sight but not one the security finds funny. They are worried that the stage will break: ‘It’s all about health and safety.” Says the security guard.

I flash my media badge at him when he asks me to leave.

“Will that stop the stage from breaking sir?”

I guess this is one American who has picked up on the British wit and sarcasm.

‘Every f***ing year.” Comes a voice from the crowd. “You are killing the WSOP.” Shouts another.

Meanwhile Erick Lindgren moves all-in on the center stage in the $5K and nobody could give an f**k.