Home / Poker / WSOP Recap: Jarred Graham Takes a WSOP Bracelet Down Under; Little Looking Big in the $5k Six Max and a Strong Bach in the Razz 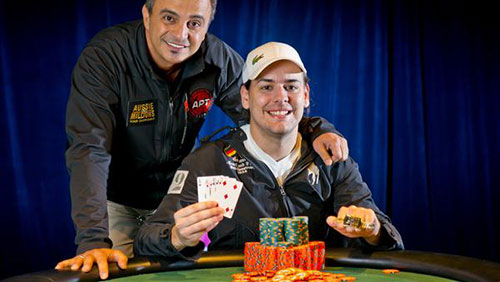 Australasia has their first piece of World Series of Poker (WSOP) gold, and it has come courtesy of the Australian Jarred Graham. The Melbourne resident took first place in Event #31 $1,500 Pot Limit Omaha (PLO) Hi-Lo, for $255,942, after defeating Marco Johnson in heads-up action yesterday. 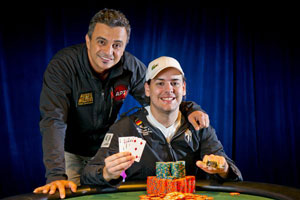 It was another agonizing defeat for Johnson who has reached six WSOP final tables, and been the bridesmaid on three of those occasions. The $158,379 that Johnson picked up for his runner-up spot was his fourth cash of this series.

936-players entered the event, proving that if the WSOP get the buy-in level just right that there are bigger fields waiting to play in the non-hold’em events. Going into the final day, Graham was the shortest stack at the table and the three-time WSOP bracelet winner Perry Green had the chip lead; Barry Greenstein was another player with three WSOP bracelets still in the field.

Green would eventually bow out in ninth place, but Greenstein really pushed the two youngsters to their limits finishing in third for $99,091. Graham’s two-pair besting the pocket aces of Greenstein to end his hopes of a fourth bracelet, and the Aussie was disappointed not to get a signed copy of Greenstein’s book – it appears that Greenstein’s trademark exit is a thing of the past.

Little Looking For Something Big

Jonathan Little continues to outperform his brethren in Event #32 $5,000 No-Limit Hold’em (NLHE) Six-Max with a chip leading performing going into the final day of action.

516-players have created a prize pool of $2,425,200 and only 14-remain in contention for the bracelet and $606,317 in prize money. Little has good company though with the likes of Allen Bari, Dan Smith, Andrew Robl, Erick Lindgren, Lee Markholt and Jonathan Aguiar all still in the melting pot.

David Bach has finished the second day of Event #33: $2,500 Seven-Card Razz the same way that he finished the first – with the chip lead.

The 301 strong field has been reduced to just 14-players as they return to play it out for the bracelet. Calvin Anderson was the bubble boy; Huck Seed, Max Pescatori, Stuart Rutter and Stephen Chidwick all made the lower end of the money spots, but it’s Bach who is in charge as he looks to win his second WSOP mixed game bracelet of his career.

How do you turn a field of 1,629 players into a field of 35 players after one day’s play – make it a Turbo event of course.

The event that has been popularized online is also picking up traction in the live arena, as players seemingly love the instant gratification feel of things. Of the 35-remaining players Victor Figuero leads the field, but he is in good company with WSOP bracelet holders Jason Duval, Jake Cody, Simon Charette and Jennifer Tilly also in the middle of the pack.

640-players entered Event #35: $3,000 PLO and 137 survived a Day One that saw Jarred Solomon finish as the chip leader. Josh Arieh, Steve Sung and Giuseppe Pantaleo a few of the more known names remaining in the top ten chip counts.