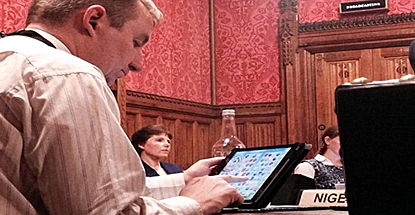 Games developer King got two titles into the Best New Games category, including the updated version of its Candy Crush franchise. King’s moneymaker made even bigger news this week after a UK Tory MP was photographed playing Candy Crush on his iPad during a meeting of the Works and Pension Committee. Amber Valley MP Nigel Mills originally defended his activities, telling The Sun newspaper that he’d “probably had a game or two” during the “long meeting.”

Mills originally insisted that he remained “fully engaged in asking questions” during the meeting and promised he would “try not to do it in the future.” By Tuesday, Mills was singing a slightly more apologetic tune, using his Twitter account to “apologize unreservedly” for his behavior, which he said “fell short of what is expected of a Member of Parliament.” Mills now offered a “guarantee” that he won’t get caught smashing sweets during business hours again.

Mills will face no discipline from his disinterest in parliamentary procedure, while the unknown individual who took the photo of the MP whiling away the hours could face a ban from ever again stepping foot in Parliament. So Mills might not have to be so diligent in curtailing his candy crushing after all.

Mills is hardly the first politician to be exposed for playing social games in legislative chambers. Last September, US Sen. John McCain was caught playing TinyCo’s VIP Poker app during a Senate Foreign Relations Committee hearing on whether to approve military intervention in Syria. McCain was unapologetic, as was the Italian MP who in 2011 was caught scouring escort sites for Romanian prostitutes during a debate on whether to sack the country’s culture minister.