Home / Sports / Brees, Dalton, Kershaw, Love sign with FantasyDraft; Philadelphia 76ers gets on board with DraftKings 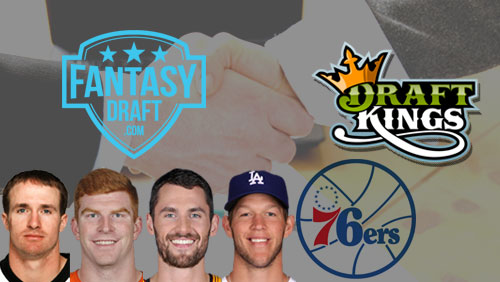 The signings of these athlete endorsers adds a level of validation to the start up daily fantasy sports sites as it seeks to entrench itself in the exploding daily fantasy sports market. The signing of Brees, in particular, gives FantasyDraft to work with one of the most marketable stars in any of the four professional sports leagues in the US. The same can be said for Kershaw, the Dodgers’ dynamite pitcher who’s coming off of a season where he earned his first National League MVP trophy and his third Cy Young award.

Meanwhile, the aforementioned DraftKings bolstered its own stable of sports partners by signing a partnership agreement with the NBA’s Philadelphia 76ers. With the announcement, the Sixers become DraftKings’ first NBA partner. More importantly, it shows that the team is actually capable of doing something right these days.

“There is incredible opportunity emerging in the fantasy gaming market, and we are proud to be the first NBA team to align with DraftKings,” Sixers Chief Executive Officer Scott O’Neil said in a statement. “DraftKings is on the cutting edge of the industry, boldly moving their business forward while taking intelligent risks – philosophies that embody the work we strive to accomplish every day at the Sixers. Today marks yet another step forward for us as we continue to revolutionize our partnerships, online offerings and fan engagement.”

With the new partnership, DraftKings now becomes the presenting partner of some of the team’s digital platforms, including its official website and its official radio broadcast. Hopefully, the partnership with DraftKings also gives Philly added incentive into maybe win a game in the NBA this season.

The Value of Kirk Cousins Is Tied To Andy Dalton
Nick Gianatis
6 January 2016
.