Sports weekend at a glance

It may not have been as big of a sports betting weekend as previous weeks but the sports world was still pretty busy handing out some juicy headlines over the weekend.

Unfortunately, not every headline is glittered with positive news and as the weekend showed, there will be times when the sports has more depressing news on its plate. 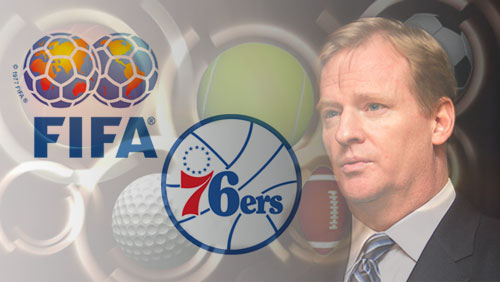 I’m not even going to pretend to know all the details about the mess FIFA is in right now but I do know that it’s turning into a huge fiasco when sponsors, major ones at that, start dropping like flies.

For those who don’t know, the World Cup tournaments in Russia and Qatar has come under fire after a FIFA investigation cleared the winning Russia and Qatar bids in 2018 and 2022, respectively, from allegations that they were both rife with corruption.

Here’s the problem: FIFA didn’t publish the entire 430-page report, opting only to use a 42-page summary because “legal restrictions” prevented it from releasing the whole thing.

Here’s another problem: The man who submitted the report, FIFA ethics prosecutor Michael Garcia, dropped a hellacious bombshell, accusing the football governing body’s head judge of misrepresenting his report into the bidding for the next two World Cups. You want to talk about a messy room; FIFA’s entire household needs some serious cleaning up.

It’s gotten so bad and toxic for FIFA that sponsors, who normally don’t intervene in issues like this, have all come out and expressed their dismay over how the investigation and the subsequent results of the report have been handled. Some sponsors like Visa and Hyundai have been vocal about their “disappointment”. Others, like Coke, have also broken ranks and called for more “transparency” from the organization.

Then you have Emirates Airlines and Sony, two of the six “tier-one” sponsors of FIFA. Instead of joining their brethren in public outcry, the two giants of their respective industries went a step further, going nuclear on FIFA by effectively pulling their respective sponsorships of the World Cup.

We’ve seen what happens when sponsors start getting involved. Palms start getting really sweaty when hundreds of million of dollars are now on the table, or in the case of Emirates and Sony, already yanked from it.

Wouldn’t it be nice if NFL Commissioner Roger Goodell and FIFA President Sepp Blatter traded places to see who can fix their new league/organization quicker? Will sportsbooks even make a spread for that? Who do they even tab as the favorite? As much as Blatter’s FIFA has been under siege, he can at least take comfort knowing that his kindred spirit in the NFL isn’t doing a lot better.

If you haven’t heard, ex Baltimore Ravens running back Ray Rice won his appeal over the NFL after  U.S. District Judge Barbara S. Jones ruled to vacate his indefinite suspension. He’s free to sign with any team now, provided a team wants to risk the obvious public relations nightmare that comes with scooping up a man who cold-cocked his then fiancé, now wife at the now closed Revel Hotel & Casino in Atlantic City.

Rice may now be out of the NFL’s exile island, but Goodell might wish he could stay there a week or two after Judge Jones’ ruling further exhibited his alarming lack of competence in handling this case. The judge called Goodell’s indefinite suspension punishment of Rice as an “abuse of discretion,” and this was after the NFL commish levied an initial – and insulting – two-game suspension on Rice, followed by a series of cartoonish mishaps on how the investigation was handled, and a blatant attempt at white-washing Rice when it became clear that he and his office bumbled and fumbled their way throughout the whole episode.

The tenor of this sports weekend has been admittedly depressing so why don’t we end it with the most depressing sports story of them all. Ladies and gentlemen, the Philadelphia 76ers suck. No, wait. Let me rephrase that. The Philadelphis 76ers are insulting the word “suck” in one of the most blatant displays of intentional sucktitude in the world of sports. Notice how I completely made up the word “sucktitude”? Well, it’s not as egregious as what the Sixers are doing now.

They’ve lost 16 straight games to start the season. If they lose their next two games, they equal the NBA mark for longest losing streak to start a season. It’s a shame because when you watch them, you actually see that their trying really hard. They just don’t have a lot of good players and management has made the decision to punt short-term success for long-term gains. It’s a sound approach, albeit a really harsh one that’s dictated by the NBA’s current business climate.

That said, all this “building for the future” talk still doesn’t take away the fact that the Sixers are doing their fans a massive injustice. If they continue this approach as I’m sure they will, they ought to do their fans a solid and not charge them for ticket prices on all home games this season.