Home / Business / Ladbrokes CEO Richard Glynn to step down in 2015 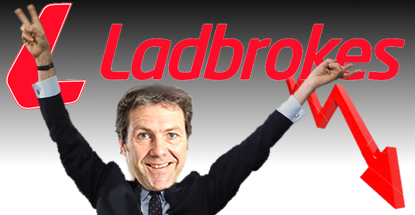 UK-listed betting operator Ladbrokes will soon have a new captain at the helm after embattled CEO Richard Glynn (pictured) announced he would step down in April 2015. In a statement released on Wednesday, Glynn said it had been his “privilege” to lead Lads through its ongoing efforts to jumpstart its lagging online operations but that it was the “right time” to head for the exits.

Lads is believed to be looking outside the company for Glynn’s successor after likely lad Nick Rust recently announced he was leaving Lads to head up the British Horseracing Authority. Whoever succeeds Glynn will be faced with a harsh new regulatory environment in which Lads’ online operations must pay 15% point-of-consumption tax on its UK customers and the fixed-odds betting terminals in Lads’ betting shops will see the machine games duty rise to 25% from 20%.

Glynn joined Lads in April 2010 following a lengthy stint heading up Sporting Index. Glynn was given the task of injecting some oomph into Lads’ flaccid digital division but doing so proved more arduous than merely popping some Viagra. After aborted attempts at buying 888 Holdings and Sportingbet, Lads gave up trying to bolt on an existing online operation. Lads then attempted to develop its own platform in-house before scrapping that plan and signing a technology deal with software firm Playtech, whose joint venture with rival William Hill had eclipsed Lads’ online performance.

While Lads’ most recent earnings report showed encouraging signs and the company says its trading for the current quarter is in line with expectations, the company’s share price has continued to languish. The stock closed Wednesday’s trading at 114p, compared to 160p when Glynn accepted the gig. Lads enjoyed a brief surge above £2 in April 2013 when it signed the Playtech deal, a blip that nonetheless allowed Glynn to collect a controversial £2.4m bonus.

In October 2013, Lads chairman Peter Erskine reportedly gave Glynn until mid-2014 to turn things around or face the axe. On Wednesday, Erskine put on his best PR face and thanked Glynn for his service, saying the company had been “transformed and is a far stronger company as a result of [Glynn’s] work.” Lads acknowledged that the digital development had taken “longer to deliver than initially expected,” but said the majority of the blame was down to “economic and regulatory headwinds.” Trouble is, these same headwinds don’t seem to have impacted William Hill, whose shares have risen 75% since Glynn assumed Lads’ reins.