Home / Sports / Brady for MVP, an NFC South team to win the Super Bowl, and other long-shot futures that could pay off 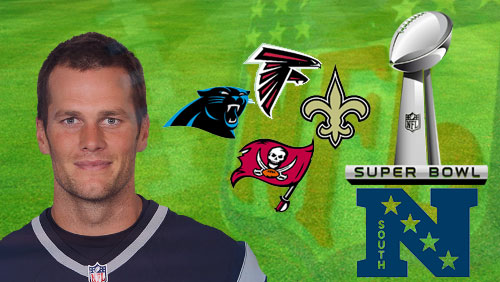 Here’s my disclaimer before you start reading this piece: none of these bets are expected to pay off so if you follow any one of these picks and they don’t work out, at least I told you that they were risky propositions from the very beginning.

But here’s the thing: I love betting on future props, especially long-shot bets that aren’t likely to win but somehow do. I’ve won a fair share of these types of bets but I’ve admittedly lost a hell of a lot more. But it’s always fun to risk a small amount and seeing them improbably cash, netting me handsome winnings in the process.

So as always, proceed with caution and don’t always trust what you’re told, or in this case, read. But if you do decide to jump on any one of my long shot futures on the current NFL season, do so knowing that I’m not promising a pot of gold at the end of the rainbow, but a live bet that has a chance of winnings, slim as it may be.

You know what’s funny to me. Aaron Rodgers has the shortest MVP odds right now at 9/5 odds, but if things break wrong for the Green Bay Packers, they may not even make it to the playoffs. Same thing for the Dallas Cowboys and DeMarco Murray who is at 13/2 odds. Even the Denver Broncos (Peyton Manning is 10/3 to win MVP) have to worry about the Kansas City Chiefs.

The only two teams in the league that look to have secured berths in the playoffs are the Arizona Cardinals and the New England Patriots. If you’re thinking along those lines, then why wouldn’t you consider Tom Brady to win MVP this year?

He’s currently sitting fifth at 14/1 odds behind the aforementioned three and Andrew Luck 9/1 odds. If the Pats can at least go 5-1 in their remaining schedule – that game at Green Bay against Rodgers will say a lot – and finish with the best record in the AFC (maybe even the league), the Brady for MVP narrative will be in full bloom.

Chance of happening: 6/10 (This is the most likely bet to win, if I’m ranking these longshots. In Tom Terrific, we trust!)

Suggestion: Small to medium-sized wager and prepare to root like hell for Brady and the Pats.

Big Ben for Most Passing Yards

Here are the odds for three quarterbacks to throw the most passing yards this season.

Player A is Andrew Luck. Player B is Peyton Manning. Player C is Ben Roethlisberger.

Chance of happening: 2.5/10 (I said all that knowing that the Steelers are on a bye in Week 12 so Luck and Manning’s lead could balloon to at least 300 yards apiece.)

Suggestion: Wait until Week 12 games are done to see how far ahead Luck and Manning are.

Small slice on the Texans?

A few weeks ago, the Indianapolis Colts looked like it had the AFC South all wrapped up. But after Week 11, the Colts are just one game ahead of the Houston Texans and yet the latter is still getting 8/1 odds to win the division?

Is it conceivable that Indianapolis can go on a late-season swoon and open the door for the Texans to barge in and claim the AFC South title?

Here’s the schedule for Indianapolis the rest of the way: Jacksonville, Washington, at Cleveland, Houston, at Dallas, and at Tennessee.

Meanwhile, here’s the schedule for Houston the rest of the way: Cincinnati, Tennessee, at Jacksonville, at Indianapolis, Baltimore, Jacksonville

Don’t look now but it’s possible the Texans can go 5-1 the rest of the way, which means that Indianapolis would have to go 4-2 just to earn the tiebreaker. 8/1 odds? Tempting, isn’t it?

Chance of happening: 3/10 (Unlikely, but Ahmad Bradshaw’s already banged up and one injury to Andrew Luck dramatically shifts the narrative)

Suggestion: Put a small piece on the Texans to win the AFC South

Bet on the NFC South

I know you’re probably thinking that I’ve gone of the deep end but hear me out for a second. Right now, the NFC South is a hot, piping mess. The Atlanta Falcons lead the division with a 4-6 record. The Tampa Bay Buccaneers are 2-8 and they’re just two games out of first place with six more games to play. That’s how bad the division is right now, and yet, when you’re talking about Super Bowl value plays, the biggest one might be from any of the four teams in this division.

Right now, the New Orleans Saints are still the favorites to win the division at 4/7 odds with the Falcons not far behind at 9/4 odds. The Carolina Panthers are at 14/1 and the Tampa Bay Bucs are at 300/1.

Do you realize that one of these four teams will make the playoffs? It could still be the Saints if they get their act together, or it could even be the Tampa Bay Bucs if they somehow catch fire and overtake New Orleans and Atlanta. Everything’s at play in this division, which is why putting a small piece on any of the four teams to win the Super Bowl could make for a live long shot bet come the postseason.

How nervous would you be if somehow, the Bucs make it to the Super Bowl and you’re holding a ticket with 1,000/1 odds on the team.

Is it highly improbable bordering on impossible? Perhaps. But is the door completely closed on the impossible happening? Nope.

Suggestion: Put a small amount on every NFC South team to win the Super Bowl. If you’re nervous about Tampa, at least bet on them to win the NFC South.