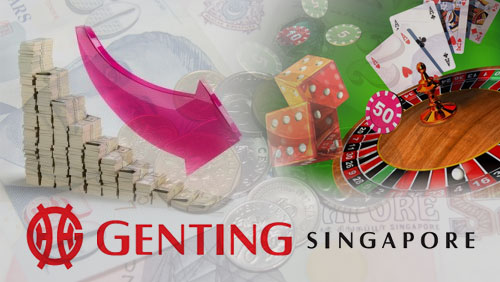 Genting Singapore PLC’s quarterly revenue and profit fell by 17% and 50% respectively, suggesting that the resilient gaming industry is facing a slowdown mainly due to lower VIP visits in China.

A bank-backed gaming analyst told Malaysian news outlet StarBiz that the lower earnings from the Genting’s Singapore unit is a cyclical weakness rather than a structural one.

“Genting’s story may not be exciting in the near term. Fundamentally, the group remains strong and its earnings are resilient but it is going through some challenges,” the analyst added.

Although Genting Singapore’s net gaming revenue fell 21% year on year in 3Q14, the company’s EBITDA margin of 39% was still strong enough to be compared to its numbers last year when it posted a margin of 44%.

On the non-gaming front, the performance of its hotels, theme parks and retail outlets remained consistent, falling just 2% in 3Q14 compared to a year ago. Genting Singapore’s hotel business saw an occupancy rate of 95%, with an average daily room rate of S$408. Resorts World Sentosa’s attractions remain strong as average daily visitation managed to grow 10% sequentially from the second quarter of 2014.

Genting Malaysia Bhd is still in the midst of expansion in relation to the Genting Integrated Tourism Plan, which will see a 10-year plan for development, expansion, enhancement and refurbishment of hotels. Analysts expect the group’s financial year to take a hit due to its expansion but will immediately recover as soon as it completes some of its new establishment following its expansion.

Genting group’s business in New York was doing well and could be further boosted should it win the bid for an upstate New York casino license.

Genting Singapore’s plans to open an integrated resort in Jeju Island in South Korea are also underway, with the company in talks with the local authorities there. Genting Singapore is said to be among the best-positioned foreign companies to get a gaming license in Japan and is keen to make a bid for an integrated resort but nothing is confirmed as the debate on the Casino Promotion Bill by the Japanese legislature is still in progress.

Looking ahead, Genting said it is seeing encouraging signs in specific sectors of the gaming business considering its global reach in Singapore, Malaysia, London, New York, the Bahamas, Manila and an Alderney-licensed online casino.

Fitch Ratings also remained optimistic as it labelled Genting Singapore as one of the mature gaming properties that would be able to withstand lower earnings margin in the next 12-18 months without impairing their credit profiles.

The rating agency believes the sharp decline in revenue from the VIP segment is temporary and that VIP numbers will improve in the latter part of 2015.