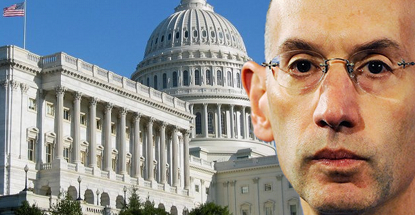 Reaction to National Basketball Association commissioner Adam Silver’s pro-sports betting op-ed in the New York Times has been swift and (largely) supportive. Silver (pictured) caused a media stir with Thursday’s opinion piece, which called for a federal framework that would allow individual US states to launch legal sports betting markets. While maintaining his league’s stance opposing New Jersey’s efforts to accomplish the same absent any federal framework, Silver said it was clear that Americans had “an obvious appetite” for a way to legally wager on sports.

On Friday, Silver appeared on Mike Francesca’s radio show (listen here) to expound on his op-ed points. Silver said his goal was to “start the conversation” and hoped that others would now weigh in with their views. Silver acknowledged that it was “going to be a long time before Congress changes the law” but said the NBA hoped to take “an active role” in moving the ball forward. Silver said the NBA had done “a ton of research” on legal betting systems in international markets and had “a template of what a law should look like.”

Asked how the NBA might benefit from a real-money sports betting market, Silver pointed to the English Premier League, where the teams benefit greatly from sponsorship deals and from betting creating “increased interest in the games.” Silver also cited Australia’s sports leagues licensing the right to bet on their products.

Silver said he wasn’t sure if that was the way to go, but if US leagues chose to take “some sort of percentage that comes off the top” then this money would be “poured back in” to ensuring the integrity of the leagues’ product. Francesca challenged Silver, asking if the leagues weren’t already taking such steps, but Silver said the extra sums would allow these measures to be taken to “another level.” (In September, New Jersey offered the leagues a 0.25% cut of betting handle for this exact purpose.)

Silver hedged on whether he viewed fantasy sports as gambling, saying there was “a line that you cross” that differentiates the two and FanDuel – with whom the NBA inked a deal earlier this week – was “still on the side of fantasy.” Silver acknowledged that “cash for cash” daily fantasy sports (DFS) games were “awfully close to gambling” but said the FanDuel deal limited player rewards to trips and other non-monetary prizes.

REACTION PRO AND CON
New Jersey State Sen. Ray Lesniak, who has championed his state’s quest for legal sports wagers, called Silver a “voice of reason” and Silver’s op-ed a “game-changer.” Lesniak told NJ.com that Silver was “saying what I have been saying all along: to having regulated gaming and to have the federal government change the law.” Lesniak said he’s starting a petition drive to lobby Congress to overturn the federal PASPA sports betting prohibition. Lesniak aims to garner 100k signatures in his state and 1m names across the country, a feat he expects to accomplish “in short order.”

Dallas Mavericks owner Mark Cuban told CBS Sports that Silver’s op-ed “has it exactly right.” Cuban said the sports leagues’ anti-betting stance was “hypocritical” given their recent embrace of DFS operators. Cuban said everyone understood that “leagues benefit from the interest” created by both fantasy sports and real-money gambling. Cuban said the leagues had historically “put up token resistance” to betting operators “for PR reasons.” But Cuban agreed with Silver that it was “time to take sports betting out of the shadows and deal with it like the huge business it is.”

Cuban’s enthusiasm wasn’t shared by NHL deputy commissioner Bill Daly, who told Pro Hockey Talk that Silver was entitled to his opinion but “that does not mean we share it.” Daly said the NHL “might question” or at least “want to test further” several of Silver’s assertions. Daly said the issue of betting was “complex” and “does not lend itself easily to a simple ‘agree’ or ‘disagree.’”

NHL commissioner Gary Bettman went on CNN’s Unguarded with Rachel Nichols on Friday to discuss the issue, warning that legal sports betting could “change the atmosphere in the stadiums and the arenas. … Do you want people at football and basketball games rooting for the spread or rooting for their favorite team?”

The National Football League, the big dog on the pro sports block, put an even less nuanced note on things. League spokesman Brian McCarthy said Silver’s opinion “doesn’t change our stance that has been articulated for decades: No gambling on NFL games.”

American Gaming Association CEO Geoff Freeman released a statement saying his group “look forward to partnering with the NBA and others who share this goal” of expanding the scope of legal wagering in the US. Freeman said the AGA would spend the next few months working “to identify the size and scope of illegal gambling in the United States and what can be done to address the issue at a federal and state level.”