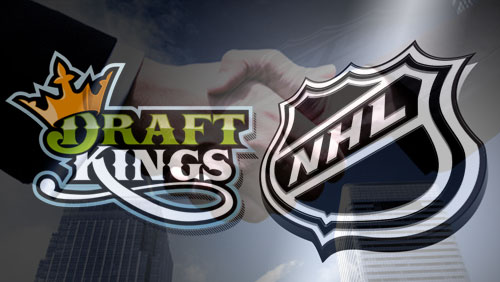 Daily fantasy sports site DraftKings has announced a partnership with the National Hockey League. The multi-year deal made the DraftKings the “Official Daily Fantasy Game of the NHL”. The two companies agreed on a branding campaign that would give DraftKings prominent brand placement across a variety of the NHL’s digital platforms, including the league’s official Facebook and Twitter accounts, as well as NHL.com and NHL Mobile.

In addition, DraftKings will also become a presenting sponsor of video previews for each regular season game and the leagues “Fantasy Players to watch” segments on NHL Live. Hockey fans who play on DraftKings will also get a chance to win a handful of prizes, including trips to many of the league’s high-profile events like the Winter Classic, the Stadium Series, the All-Star Game and the end-of-the-season NHL Awards.

“We are pleased to partner with DraftKings, a leader in daily fantasy sports,” NHL Executive Vice President of Global Partnerships Keith Wachtel said in a statement. “Recognizing the direct correlation between fantasy sports and fan engagement, we look forward to providing our fans with a new opportunity to extend and enhance their NHL experience each and every day of the season.”

“The National Hockey League is a best-in-class organization, and DraftKings’ daily fantasy hockey players are some of their biggest fans,” DraftKings Vice President of Business Development Jeremy Elbaum chimed in. “DraftKings is proud to partner with the NHL to bring premium new experiences to the League’s enthusiastic fan base.”

NHL’s partnership with daily fantasy sports site is the latest in a string of deals it has inked in the past few months. In October, DraftKings announced a similar partnership with the NFL’s New England Patriots.

It’s not unreasonable to surmise that this new deal with the NHL reeks of the same flagrant hypocrisy by the sports leagues who go to the ends of the world trying to ban sports gambling from states like New Jersey and yet has no problem jumping into bed with a fantasy sports site like DraftKings, which at its core, is also offering some form of wagering. Make no mistake: these daily fantasy sports sites are awesome and they deserve the success they’ve received. But let’s not confuse their business with the league’s attempts at riding its popularity when these same leagues are moving heaven and earth to keep sports betting under the dirt.