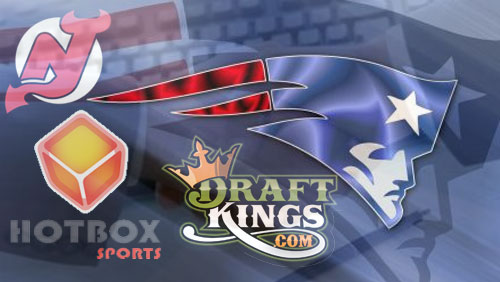 DraftKings has launched a partnership with the New England Patriots.

The deal is the first of its kind featuring professional football team and a daily fantasy sports operator, similar to typical sponsorship agreements struck up between European football clubs and online gaming companies.

The Patriots’ partnership with DraftKings will provide the daily fantasy sports website in-stadium LED signage at Gillette Stadium.  The signage will promote DraftKings fantasy updates.  Additionally, DraftKings content will be included on the Patriots’ social media accounts as well as the team’s e-newsletter and Fantasy Tips of the Week posted to the Patriots’ official website.

The partnership with the New England Patriots marks another milestone for the daily fantasy sports operator as it continues to increase its business profile in mainstream platforms like the Pats and, by extension, the NFL.  The Boston-based operator not only has one of the most popular teams in the league promoting its content; it also helps raise awareness of DraftKings from within its own state.

“DraftKings is incredibly proud to associate ourselves with the New England Patriots, one of the league’s most successful franchises, right here in our backyard,” DraftKings CMO and Co-Founder Paul Liberman said in a statement. “The Patriots are one of the league’s model franchises and we are pleased to align ourselves with them.  We look forward to bringing the excitement of daily fantasy sports into the game-day experience.”

The deal does have irony dripping from buckets, especially with the NFL’s long-standing and well-chronicled hypocritical stance against sports betting. How it can sign off on a partnership between one of its teams, let alone one of its most glamorous teams, with a daily fantasy site like DraftKings while keeping a straight face proclaiming its resentment on any kind of sports betting is still beyond reasonable comprehension. Fantasy sports may be legal under the Unlawful Internet Gambling Enforcement Act but it’s still a form of sports betting, a form that the NFL’s Patriots is apparently endorsing now even when the NFL itself is still in the middle of a lawsuit against New Jersey to stop the state from offering sports betting within its borders. Notice the flagrant disconnect there.

Similar to the DraftKings-Patriots arrangement, Hotbox Sports will be heavily promoted by the New Jersey Devils leading up to the former’s launch of s new style of fantasy sports game in late November. The fantasy sports company will be prominently featured at the team’s home arena, the Prudential Center, as well as in the media and social channels.

“Fantasy sports plays an important role in a fan’s experience and we wanted to bring Devils fans a game where they could focus on their favorite players and their favorite team,” New Jersey Devils CEO Scott O’Neil said in a statement. “Our collaboration with Hotbox Sports, offering both free-to-play games and this first-of-its-kind entry-fee game, will ensure Devils fans have an unrivaled fantasy game experience.”

Hotbox Sports CMO and Head of Business Development Terry Lyons echoed those statements, calling the partnership with the Devils as beneficial for its fans and supporters. “Hotbox Sports is very proud to be working with the New Jersey Devils on this new and engaging fantasy game for sports fans,” Lyons said. “We are thrilled to activate our first entry-fee product with strong sponsorship support from the New Jersey Devils, our longtime business partner who sees the future of Hotbox Sports in the exciting space of fantasy sports.”