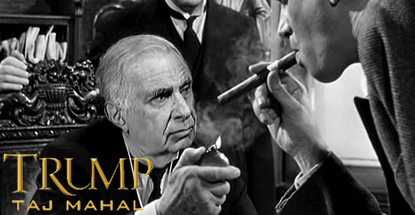 Billionaire Carl Icahn’s proposed rescue of Atlantic City’s Trump Taj Mahal casino hit a snag on Friday after a US Bankruptcy Judge rejected Icahn’s plan to end payments to the casino workers’ pension fund. In exchange for injecting $100m of cash into the struggling casino, Icahn (pictured on the left, offering labor rep Jimmy Stewart a light) has insisted on significant concessions from casino staff, including replacing their pension plan with a 401k scheme and scuttling their health benefits. Absent these concessions, the Taj is scheduled to close on Nov. 13, which would be the fifth casino closure AC has witnessed this year.

Icahn’s peeps have said ending the pension plan would save Trump Entertainment Resorts around $3.7m per year. But US Bankruptcy Judge Kevin Gross said it was not within his power to veto specific aspects of the casino workers’ collective bargaining agreement. However, Icahn will get a second chance at retiring the pension plan, as Gross will entertain the possibility of scrapping the entire labor agreement when he next considers the matter on Oct. 14.

The rescue plan proposed by Icahn, who holds the majority of the Taj Mahal’s debt load, envisions getting $30m in property tax relief, something AC mayor Don Guardian has already rejected as unworkable. Icahn also wants $25m in cash from the Casino Reinvestment Development Authority or some other sucker state agency, which also appears doubtful. Should no bailout prove possible, the Taj would join the Atlantic Club, the Showboat, the Trump Plaza and Revel in closing their doors in 2014, although Revel’s new owners hope to reopen the joint as a workable casino at some point in the future.

GOLDEN NUGGET FINED $30K OVER SURVEILLANCE DIRECTOR TERMINATION
Meanwhile, the New Jersey Division of Gaming Enforcement (DGE) has slapped a $30k fine on the operators of the Golden Nugget Atlantic City for violating rules governing casino surveillance and audit operations. The DGE rebuked the Nugget for improperly terminating its director of surveillance in April and temporarily allowing general manager Tom Pohlman to assume surveillance duties. Neither the turfed director’s name nor the reasons for his/her dismissal have been made public.

Under state regulations, only an independent audit committee has the authority to remove a casino surveillance director. Pohlman, who told the committee of the plans to terminate the director, was found to have regularly attempted “to guide the policy, purpose and responsibility” of the surveillance department. Pohlman was suspended for three days without pay and ordered to undertake a refresher course on casino security regulations. Landry’s, the Nugget’s parent company, issued a statement saying it disagreed with the DGE’s finding but had declined to protest the matter to avoid incurring even higher legal costs.