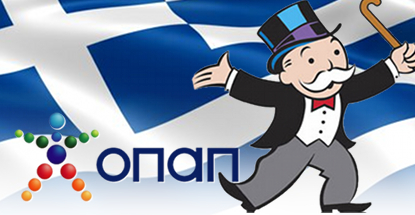 Greece‘s top court has ruled that the online betting monopoly of Greek gaming company OPAP is legal, rejecting allegations by international online gambling operators that the monopoly was a violation of European Union fair trade rules. On Tuesday, the Council of State ruled that the Greek government – which sold its 33% stake in OPAP for €652m in May 2013 – had enacted sufficient reforms in its gambling sector to have brought OPAP’s monopoly in line with EU edicts.

The cash-strapped Greek government has long been accused of granting OPAP favorable concessions in order to boost the price of its OPAP stake before it went on the auction block. In 2012, Greece revoked the online betting licenses it had issued a year earlier to a couple dozen international operators and extended OPAP’s online betting monopoly until 2020.

The jilted operators protested this licensing hokey-pokey and the Court of Justice for the European Union (CJEU) ultimately ruled that OPAP’s monopoly was illegal. However, the CJEU allowed Greece an out if it could enact reforms to demonstrate the monopoly was primarily intended to protect consumers rather than boost government tax coffers. The Council of State claims these concerns have been addressed and that the monopoly was doing its noble job of combatting illegal betting operators and protecting those helpless Greek gamblers. Naturally, if anyone expects this to be the final word on the subject, they clearly haven’t been following this story, which is only slightly shorter than the Illiad.

In other OPAP news, the company has been awarded the 20-year exclusive right to conduct pari-mutuel horse wagering in Greece. OPAP had been vying with Greek lottery technology outfit Intralot for the concession, the tender for which was reopened in August after the Hellenic Republic Asset Development Fund (HRADF) tasked with privatizing state assets determined that none of the bids were up to scratch. HRADF has since announced that OPAP’s €40.5m bid – made in conjunction with British fund manager Global Family Partners – was the highest received.