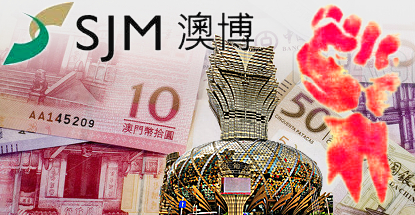 Macau casino workers may target operator SJM Holdings for another labor action during the upcoming Golden Week holiday, despite suggestions that local police are trying to intimidate the workers’ union leaders into tempering their protests. The Golden Week holiday, which commences Oct. 1, is one of the busiest times of the year for Macau casinos. And with analysts projecting September to be the fourth straight month of gaming revenue decline, the last thing SJM needs is a shortage of baccarat dealers when the gaming tables are finally full.

SJM has been the target of two recent high-profile labor actions led by casino workers association Forefront of Macau Gaming (FMG). Last weekend saw around 700 SJM staff congregate outside SJM’s flagship Grand Lisboa casino demanding better pay and improved working conditions. Two weeks before that, several hundred Grand Lisboa staff all took sick leave at the same time, forcing SJM to shift dealers from its other properties and offer others triple-pay to show up for work.

Since last weekend’s protest, FMG leaders have reported being questioned by police over allegedly breaking through police barricades during an August street protest that targeted all six Macau casino concessionaires. Police claim to have evidence of protesters breaking through a police cordon but FMG co-founder Cloee Chao told Bloomberg the questioning was meant as “a warning and a threat to me.” Chao said she and fellow FMG execs Lei Kuok Keong and Ung Kim Ip were told by police they could be charged with aggravated disobedience, although no charges have yet been filed.

This week also saw FMG’s Ung and around 200 MGM China workers meet with Macau’s Labor Affairs Bureau. Many of the dealers say they earn less than the average Macau dealer monthly salary despite working at MGM Macau for years. The workers also want MGM to calculate their bonuses based on their combined salary and tips, rather than on salary alone.

Ung told Macau Business Daily that the MGM workers weren’t satisfied with the response they got from their meeting with the Bureau and wouldn’t rule out future job actions at MGM Macau. MGM China issued a statement saying it would continue to have an “open and positive” dialogue to maintain labor harmony.

Meanwhile, FMG leader Ieong Man Teng has denied local newspaper reports that his employer Wynn Macau had compensated him in exchange for stirring up trouble with other casino operators while leaving Wynn alone. Ieong said the reason Wynn had yet to be targeted as severely as some other operators is because Wynn paid the highest average salary of all six operators, leaving “fewer staff to participate in such fights.”