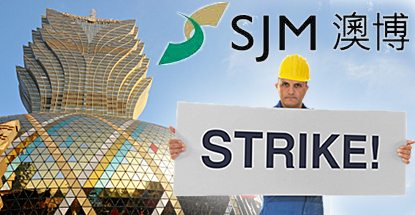 Macau’s casino industry experienced its first direct labor union work stoppage on Saturday, but the blow proved less severe than advertised. Earlier this week, about a thousand casino employees took to the streets, traveling from one casino to another, to protest what they feel are less than optimal working conditions and compensation packages. Forefront of Macau Gaming (FMG), the union that represents these casino workers, promised this Saturday would see a targeted protest against the Grand Lisboa casino, the flagship property of Macau’s market-leading SJM Holdings.

But while FMG leaders had warned that over 1,000 casino dealers would ‘cap the chip floats’ and refuse to deal cards to gamblers, the reality fell far short of that nightmare scenario. On Friday, FMG exec Ieong Mang Teng told Reuters that some Grand Lisboa dealers would merely show up late for their regular Saturday shifts (which officially began at 6am), while others would refuse to work any overtime. Ieong said this would “pause” table game activity.

On Saturday, Teng said SJM had “mobilized additional manpower support to handle the situation.” FMG secretary general Cloee Chao told GGRAsia that SJM had transferred staff from smaller SJM casinos to the Grand Lisboa to cover any shortfall. SJM also promised that any Lisboa dealer willing to show up for work on time would receive “compensation three times their salary.”

In addition to neutering FMG’s strike action, SJM has also taken steps to address its workers’ demands. On Friday, public broadcaster TDM announced that SJM would provide annual living subsidy increases for its 21,700 full-time staff. The subsidies, which would kick in next year and last until 2020, would equal either 1.5 months or two months of their current monthly salary. Other Macau casino operators have either promised or delivered similar bonuses in recent months, but FMG has stated that these top-ups fail to address their core concerns.

Earlier this week, SJM boss Ambrose So publicly abandoned his pursuit of changes to Macau law that would have permitted the importation of foreign workers to act as casino dealers, a job legally restricted to Macau residents. Macau casino operators will need to hire up to 17k additional dealers to staff the new resorts being built on Cotai as part of an estimated 55k total new hires. So had pushed Macau legislators to allow foreign dealers but this proposal was shot down this week by Macau’s chief exec Fernando Chui Sai On, who is running unopposed for another five-year term in Sunday’s ‘election’.