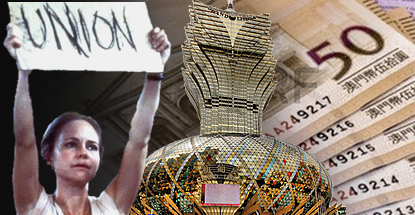 Macau casino operator SJM Holdings is bracing for a significant ramp-up in the labor unrest currently plaguing the Asian gambling hub. On Saturday, around 1,000 dealers at SJM’s flagship Grand Lisboa property plan to ‘cap the chip floats’ and refuse to deal cards to gamblers until SJM agrees to their union’s demands. These demands include better pay and benefits as well as protection from the wrath of losing VIPs looking for a scapegoat. The Lisboa accounted for 36% of SJM’s overall revenue and 56% of its profit in the first six months of 2014.

The Forefront of Macau Gaming (FMG), which represents casino employees, announced Saturday’s work stoppage shortly after Monday’s street protests, which targeted all six Macau casino concessionaires. Macau Business Daily quoted FMG vice-president Le Kuck Keong saying SJM’s workers are prepared for retaliation, including possible dismissal. But Le insists that the right to strike is granted under Macau’s Labor Law and FMG will intervene if SJM starts firing workers en masse. Should the float capping not provoke SJM into action, the FMG says its next move will be to instruct all SJM employees to take sick leave simultaneously.

The FMG timed their labor action well, given that this weekend marks the casinos’ last chance to regain some of the momentum the Macau market has lost this summer. Credit Suisse analysts in Hong Kong are suggesting August’s monthly gaming revenue total could fall as much as 6% year-on-year, which would mark the third straight month of declining revenue, a phenomenon not witnessed in Macau in five years.

THE TALE OF THE TAPE
According to Macau’s Statistics and Census Service Bureau, the average full-time casino employee in Macau saw their June paycheck rise 6.7% year-on-year to MOP 20,160 (US $2,525). The average monthly salary for dealers was MOP 17,530 ($2,200). Roughly 45% of Macau’s 57,550 full-time casino workers are dealers. The FMG wants an across the board 10% pay raise for dealers and all workers below the rank of manager.

Some casino operators have been doling out employee bonuses in a bid to keep the labor peace. In July, Las Vegas Sands announced it had spent a total of $29m in “14th month” bonuses to its Sands China employees in the past quarter. Wynn Macau recently gave its employees a 5% raise and announced a plan to distribute $4k in company stock to each staffer. Just this week, Galaxy Entertainment Group announced a ‘special reward program’ that would give full-time staff shares in the company worth 3x their monthly salaries as well as an extra month’s pay in July for the next two years. The FMG has dismissed these offers as not addressing their core demands.

NO FOREIGN DEALERS FOR NEXT FIVE YEARS
Analysts at Barclays believe the flurry of large resort casinos set to open on Cotai over the next few years will necessitate the hiring of over 55k additional employees. Between 14k and 17k of these employees will be table dealers, which by law must be Macau residents. Some casino operators – including SJM boss Ambrose So – have pushed Macau’s government to relax this restriction so that they can bring in foreign dealers.

But that idea has been nixed by Macau’s Chief Executive Fernando Chui Sai On, currently running unopposed for another term in office. In laying out his reelection platform a couple weeks ago, Chui insisted there would be no importation of foreign dealers, as least not for the next five years following the Aug. 31 election. Indeed, Chui wants casinos to help fund higher education for their employees to better prepare them to take on more senior management roles.

Recognizing a dead end when he sees one, SJM’s So reversed his position on foreign dealers this week, saying he “would support” Chui’s policy. So said SJM “would constantly talk with our staff to get to know their living index. And we’d see how we could lift or improve their benefits and recruitment terms.” It remains to be seen how SJM plans to address its staff’s chip hostage demands this weekend.