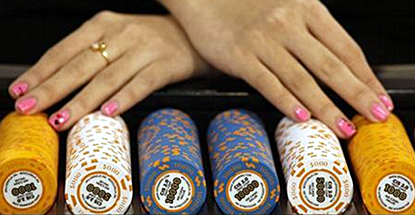 Macau casino croupiers are the least happy gaming industry employees, according to statistics compiled by the Macau University of Science and Technology. The latest Macau Employee Confidence and Satisfaction Index indicated 0.3% gains in both categories among employees of all professions, but casino employees reported a 1% decrease in confidence and a 0.6% drop in satisfaction with their jobs. Casino croupiers, who make up one-third of all casino employees, reported confidence levels falling 5.2% and satisfaction with their jobs down 2.6%.

Part of the reason behind croupier malaise lies with the abuse they often suffer at the hands of high-rolling gamblers looking for a scapegoat to blame for their losses. Between 2011 and 2013, Macau Judiciary Police reported 28 cases of physical assault against casino employees, yet none of these cases resulted in convictions. Macau Gaming Enterprises Staff Association exec Choi Kam Fu told Macau Business Daily that assaulted employees were often pressured by casino management into dropping the charges in exchange for the gamblers apologizing.

Perhaps it’s no wonder, then, that crimes committed by Macau casino dealers rose 85% last year. The Tribuna de Macau reported there were 50 criminal charges leveled against dealers in 2013, 33 of them involving embezzlement or theft. The paper reported that the actual figures might be significantly higher as some casinos choose to deal with such matters internally.

Morgan Stanley estimates that the new Cotai casinos will require up to 12,600 new croupiers but says the local labor market will only be able to supply a quarter of this need. Local labor union president Ieong Man Teng maintains there would be no need to import migrant workers provided Macau gaming regulators strictly enforce the government’s stated 3% annual growth in the number of gaming tables.

SJM’s So claimed that the current policy was preventing casinos from promoting croupiers to management positions because “we cannot hire people to replace them as they are promoted.” Macau Chief Executive Fernando Chui Sai On responded by saying the government’s position hadn’t changed but suggested that there could be some wiggle room in the future so long as local residents had adequate employment opportunities.

In the meantime, Macau casinos are endeavoring to keep their individual ranks of croupiers from jumping ship. In February, Sands China announced it was giving its 26k employees a 5% pay raise. Not to be outdone, Wynn Macau announced it was giving its 7,600-strong workforce a 5% pay raise and a bonus equivalent to one month’s salary. One month later, Steve Wynn upped the ante by announcing two new employee benefit programs for non-senior management, including a plan to give each employee 1,000 shares of Wynn Macau (worth about $4k per employee). Wynn chairman Steve Wynn said it was his “fundamental belief that our amazing success should also be shared as a family.”