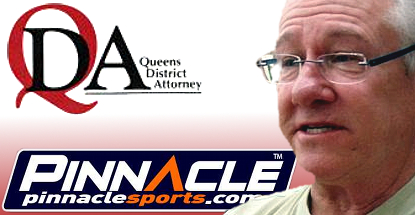 The Queens County New York District Attorney’s Office has dropped charges against a key defendant in its case against online bookmaker Pinnacle Sports. On Wednesday, the QDA dismissed all criminal charges against 68-year-old philanthropist George Molsbarger (pictured), one of 25 individuals charged in October 2012 over alleged illegal gambling activities related to the internationally licensed online betting site.

Molsbarger’s attorney Nathan J. Hochman released a statement saying decisions to drop all criminal charges nearly two years after an indictment “do not happen often in our criminal justice system” so Hochman gave props to the QDA for its decision “to do the right thing” after careful consideration of the evidence (or lack thereof). Molsbarger had been looking at a possible 25-year jail sentence but is now “elated to close the books on his involvement with this criminal case.”

Molsbarger’s elation comes three weeks after the QDA dropped 56 felony charges against Stanley Tomchin, another supposedly key defendant in the case against Pinnacle. After all that fuss, Tomchin agreed to a deal in which he pled guilty to a single misdemeanor charge of sixth-degree conspiracy.

The QDA has yet to update the world on the status of its case against the other main defendant, Nevada resident Brandt England, fingered by the QDA as one of Pinnacle’s alleged owners. England previously pled guilty to a single count of promoting gambling after being indicted in 2008 over a Phoenix-area credit card processing system linked to a Costa Rica-based betting site.

To date, the biggest scalp claimed via this two-year-old prosecution has been former Cantor Gaming sportsbook director Mike Colbert. But the QDA also dropped its charges against Colbert in exchange for Colbert pleading guilty to a single felony conspiracy charge in federal court. Colbert was fired from his Cantor job shortly after the indictment dropped and Cantor (now CG Technology) agreed to a $5.5m fine imposed by Nevada gaming regulators to wipe its own slate clean.