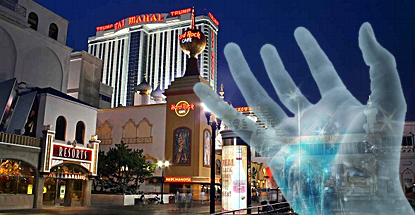 Atlantic City’s 11 (for the moment) brick-and-mortar casinos earned gaming revenue of $264.2m in July, a decline of 6.6% from what those 11 casinos earned in the same month last year. Statistical comparisons are skewed by the January closure of the Atlantic Club, whose contributions aren’t included in the above figures (if they were, the decline would have been 11%).

Also not included in the above figure is the $10.1m earned via online gambling, a revenue stream not available last year. Direct year-on-year comparisons will become even more problematic as three more casinos – Revel, the Showboat and the Trump Plaza – prepare to close their doors before the end of September. For the year-to-date, AC casinos have earned $1.55b, down 2.6% if you exclude the Atlantic Club, down 7.2% if you don’t and down even more when you subtract the $73.1m online gambling has contributed thus far in 2014.

The July decline at the 11 casinos that were operating in both reporting periods was primarily due to decreased table game win, which fell 15.6% to $67.5m, while slots fell a comparatively minor 3.1% to $196.7m. Just four casinos reported year-on-year gaming revenue gains. Not surprisingly, the doomed Revel posted the biggest individual gaming revenue decline, falling 36.3% to $15m.

The Borgata was among the seven decliners, falling 6.2% to $60.2m, although that was still good enough to continue its market-leading status. Running a distant second was Harrah’s, which stopped abusing its guests long enough to gain 2.1% to $35.6m. Caesars Atlantic City dipped 20.1% to $28.1m, barely edging out the Tropicana, which rose an impressive 34.2% to $27.7m.

On Wednesday, New Jersey Gov. Chris Christie announced he would call a special meeting of Atlantic City officials and the state’s leading politicians to discuss AC’s future in the wake of Revel’s closure. Christie issued a statement saying the Sept. 8 meeting would address the “transformation taking hold in Atlantic City.”

In the meantime, Thursday will see the launch of a new ad campaign intended to counter the raft of negative headlines with which AC’s floundering casino business has saddled the city. The Atlantic City Alliance – the same group behind the ‘Do AC’ campaign – is running full-page ads in the Wall Street Journal, the Philadelphia Inquirer and the Newark Star-Ledger to promote AC’s non-gaming attractions.