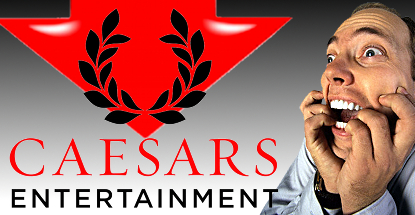 Casino operator Caesars Entertainment lost nearly half a billion dollars in the second quarter of 2014 as gaming revenue fell and interest payments rose. Overall revenue in the three months ending June 30 rose 3% to $2.18b but gaming revenue slipped 1.9% to $1.38b while interest on Caesars’ industry-high $24.2b debt load rose 21.1% to $653.7m. The net result was a loss of $466.4m, more than double the $204.2m loss recorded in the same period last year.

Caesars CEO Gary Loveman said the company’s operations in Las Vegas had a strong quarter thanks to increased VIP baccarat turnover and improved win rate, especially at Caesars Palace. Loveman was keen to trumpet the over half-a-million patrons who’d ridden the 550-foot-high High Roller Ferris wheel since it took its first revolution in Vegas this March. But seriously, when over one-third of your gaming revenue is going toward interest payments, you’ve got issues no carnival ride can resolve.

Besides, gains in Vegas only partially offset “persistent softness” in Atlantic City and other regional markets. Loveman said the company was trying to “maximize earnings on lower revenue,” which includes reducing capacity “to appropriately align supply in certain markets with the levels of demand.” The quarter saw Caesars close its Harrah’s Tunica in Mississippi and announce plans to close the Showboat Atlantic City at the end of August, which will reduce Caesars’ AC properties to three.

It appears Caesars will get help in reducing capacity in Atlantic City, after rumors spread on Monday that none of the bids submitted last week for the bankrupt Revel property had been deemed qualified. Loveman told analysts the lack of qualified buyers indicated that people were “finding it hard to imagine they can make money” keeping Revel open. From 12 casinos at the start of the year, AC will likely be down to eight by September. Loveman suggested all these new vacant buildings should be remodeled into “something that’s desirable” for “some sort of multi-dimensional shore side resort.”

Loveman said talk of opening casinos in northern New Jersey “wouldn’t concern” him. Loveman suggested the state government would likely take that step with an eye towards alleviating the dire situation in AC and thus existing AC casino operators could be “the principal participants” in the new market. Loveman suggested the new market might feature a higher tax rate, so at least “some of the proceeds from the north can be redistributed to support transition in the south.” (No way is would-be GOP presidential candidate Chris Christie going to win Tea Party support having signed anything containing the word ‘redistribution.’)

Looking abroad, Loveman says the South Korean government expects Caesars’ planned integrated resort-casino on Yeongjong Island will be up and running by the time the country hosts the 2018 Winter Olympic Games. Loveman says the company is “mobilizing our efforts” to meet that target.

WHAT’S IN A NAME?
Before taking analysts’ questions, Loveman cautioned that he wasn’t prepared to venture into the “demilitarized zone” and shed any more light on the company’s confusing capital structure. It’s a good thing these calls don’t have a video feed, as Loveman was likely referring to his notes just to keep track of which offshoot owned what casino and how any of the divisions had performed on a year-to-year like-for-like basis.

All of these divisions have been frantically swapping assets and debt obligations in an apparent bid to protect profitable assets from grabby hands in the quite likely event of a ‘restructuring.’ The flurry of lawsuits objecting to this divisional inbreeding has also left Caesars execs legally tongue-tied when it comes to explaining anything beyond ‘it’s complicated.’

What isn’t complicated is the whole ‘we lost hundreds of millions of dollars… again’ thing. Caesars has demonstrated a capacity for generating serious cash flow, but when interest payments routinely exceed half a billion dollars, the end is a foregone conclusion. Caesars is like an elephant being attacked by an army of ants. The elephant will kill thousands upon thousands of ants but they will just keep coming. The only question now is who gets stuck cleaning up the carcass and who makes off with the ivory.