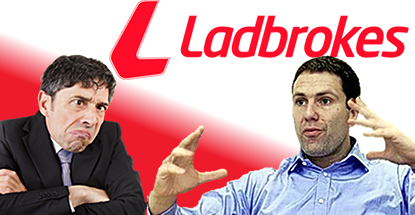 Ladbrokes CEO Richard Glynn (pictured far right) is attemtping to make a case for why shareholders shouldn’t kick him to the curb as the bookmaker’s online profits fell by nearly three-quarters in the first half of 2014. Group revenue over the first six months of the year eked up 1.6% to £577.8m – up 4% counting a tripling of revenue (£10.7m) from high rollers – but pre-tax profits fell 49.7% to £27.7m as expenses rose.

Despite the 2014 FIFA World Cup betting frenzy, Ladbrokes’ much-maligned digital channel saw profit slip 72.2% to just £3m as online operating costs rose 28.1%. The transition to a fully Playtech-powered online platform took longer than Lads envisioned but the company says it has turned the corner and is now primed to reap the benefits in H2 and beyond.

On the retail front, UK revenue was flat at £405.7m but profit slipped 21.3% to £57.6m thanks to increased costs and decreased gross win margin. OTC wagering grew 5% but unfavorable football results in Q1 dragged gross win down 3.1% to £196.3m. Fixed-odds betting terminal (FOBT) stakes and win (£209.4m) were both up marginally.

Lads’ H1 figures pale in comparison to archrival William Hill, whose own H1 report featured online profits of £80.2m – nearly three times that of Lads’ overall profit over the same period. Hills also enjoyed a World Cup wagering total nearly twice that of Ladbrokes and Hills’ World Cup handle was up 80% from the 2010 tournament, while Lads’ rose a mere 22%.

Despite the dire comparison, investors let Ladbrokes off the hook, as the stock closed down less than half a percentage point to 129.9p. But Lads is heading into a period in which it will have to deal with the UK’s new 15% online point-of-consumption tax (POCT) and the new 25% duty on FOBTs, so Lads’ challenges are only just beginning.

Glynn attempted to put the best positive spin on the “unquestionably poor” H1 performance, saying management had “delivered” on its internal timelines for implementing its online metamorphosis and the focus would now shift to “translating that into growth.” As for his own future, Glynn told the Telegraph that he was “not planning on going anywhere” although that decision is not entirely his.