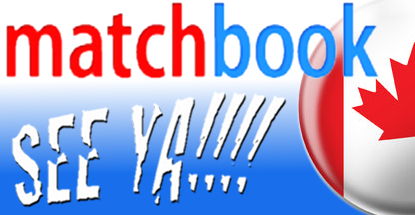 Wagers placed before that date will remain open and winnings will be paid out as the events are decided. But all funds must be withdrawn from accounts by August 22, after which Matchbook will automatically refund account balances to players’ bank accounts, presuming they have that info on file.

Triplebet said the decision to exit Canada was made following “a comprehensive review of all operations” but otherwise offered no specifics on what that review had determined. A company rep posted in SBR’s forum, repeating the ‘business decision’ talking point but making it clear that the company would be offering no further comment on the matter. Matchbook brand strategy chief Paul McGuinness told eGaming Review the decision was “purely commercial” to allow the company to better focus on other markets. Matchbook withdrew from the US market in 2011, citing a desire to focus on Europe and Asia.

In February, the Conservative government’s proposed changes to Canada’s anti-money laundering regulations sparked concerns that a wider crackdown on Canadian-facing online gambling sites was in the works. However, these concerns dissipated after the Tories clarified that the changes applied only to gambling websites operated by provincial lottery monopolies, like the British Columbia Lottery Corporation’s PlayNow.com.

Meanwhile, Canada’s C-290 sports betting legislation continues to languish in the Senate, despite passing the House of Commons two years ago with all-party support and enjoying broad support among Canadian citizens. The bill, which would allow provincial betting monopolies the right to offer single-game wagers rather than the three-game minimum parlays currently on offer, has passed two of its required third readings in the Senate but stalled after opposition was mounted by anti-gambling types and representatives of the pro baseball and hockey leagues. The Senate is currently on its summer break and won’t reconvene until September 16.