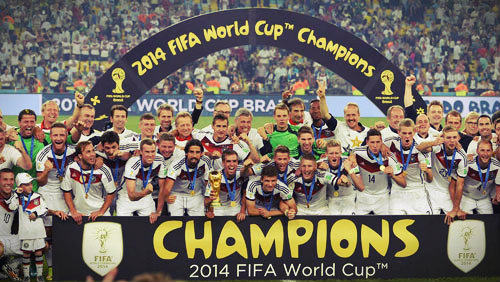 Everyone who believes football is the ultimate team sport were vindicated when Germany, with 5/1 odds to win before the tournament started, won the 2014 World Cup, beating Argentina at 1-0, in a tense match that featured plenty of missed chances for both sides.

This is the fourth World Cup title for the Germans, tying them with Italy for the second most, trailing the Brazilians who own five titles.  This is the golden generation of German football; players lived up to the lofty praise and high expectations placed on their shoulders. The fact that they did it with solid team play makes the accolades that much sweeter.

If you saw the match, you saw Bastian Schweinsteiger quite literally throw life and limb for the cause, repeatedly tumbling on the grass and even sustaining a nasty gash on the cheek. You saw goalkeeper Manuel Neuer chasing after balls he had no business running after. Let’s not forget poor Cristoph Kramer who was seeing his first extended run in the tournament only to get knocked upside his head with a concussion before being substituted in the first half.

Speaking of substitutes, how about Mario Gotze who came in the 88th minute to replace the incredible Miroslav Klose, etched his name in German football lore with a sublime volley to beat Argentina goalkeeper Sergio Romero to give the Germans the only goal they’d need.

The heartbreak from early exits in 2006 and 2010 are forgotten, forever cast in the sea with their victory over Argentina.

This is the dawn of a new age for football. Germany reigns supreme in 2014.  Most of the team is still young to compete in at least two more World Cups; it’s time to start thinking of this title run as the start of Germany’s dominance on the pitch.