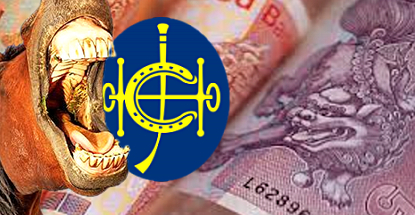 The Hong Kong Jockey Club (HKJC) had the “most remarkable and notable season” in its 130-year history, according to CEO Winfried Engelbrecht-Bresges. The HKJC, which holds a monopoly on horseracing and sports betting in the special administrative region, reported record total turnover of HKD 101.8b (US $13.1b) in the 2013-14 season that drew to a close last Sunday.

The HKJC’s season closed out on a high, with the season finale at Sha Tin racecourse attracting a crowd of nearly 35k spectators. Last Sunday’s betting turnover topped HKD 1.778b ($229.4m), the highest single-day mark in 17 years. William Nader, the HKJC’s executive director of racing, called the most recent campaign “the greatest season in the history of Hong Kong racing, both domestically and internationally. For a little place we pack a big punch.”

The HKJC’s next season starts on September 14 and there are a few new wrinkles in store. The HKJC has announced it will stage 10 International Group 1 (Gr1) races in 2014-15, up from six in previous seasons. The HKJC has also announced purse increases for the Gr1 races of between HKD 1.5m and HKD 3m and a 10% rise in the new season’s total prize money to HKD 990m ($127.7m).

The HKJC is waiting to hear whether the Australian Competition and Consumer Commission will approve a deal that would allow Aussie punters to take a dip in the HKJC’s pari-mutuel pool. If approved, punters wagering with Tabcorp and TattsBet could gain access to the HKJC’s pools when the new season kicks off in September. Wagers placed in Hong Kong by an Aussie tote would be taxed only at home, something organizers hope will boost domestic tote betting, which has flattened over the past decade. The HKJC’s Nader called the deal the “first step in a partnership” and said the HKJC “would like to eventually bet into Australian pools on your racing.”