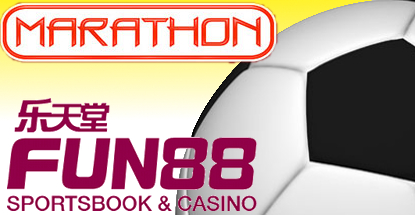 Alderney-licensed sports betting operator Marathonbet has inked a couple of sports sponsorship deals. Following up on last year’s shirt sponsorship with (since relegated) Premier League footballers Fullham FC, Marathonbet has signed on as global betting partner of West Ham United. Terms of the deal, which takes effect when the new season kicks off in August, were not disclosed, with the club saying only that the duration was “long term.” Marathonbet will also assume title sponsorship of a pre-season home friendly.

Marathonbet has also signed a two-year deal to be the main sponsor of the Scottish Championship League’s Hibernian FC. In exchange for what the club called a “significant” six-figure sum, Marathonbet will see its logo adorn the players’ home and away shirts and will get to operate in-stadium betting at Easter Road. Marathonbet replaces ginger beer maker Crabbie’s, who’d acted as Hibs’ sponsor for the past three years. Marathonbet CEO Graham Luke called his company’s first foray into Scottish football “a key vehicle in broadening the awareness of our brand.”

Isle of Man-licensed online gambling operator Fun88 has reconnected with Burnley FC after a two-year hiatus. Fun88’s logo appeared on the Clarets’ shirts between 2010 and 2012, but Burnley then chose to shack up with online kitchen retailers Premier Range for the next two seasons while Fun88 sought refuge in the arms of Tottenham Hotspur. But with Premier Range now out of the picture, Burnley and Fun888 have agreed to rekindle their relationship for the 2014/15 Premier League season. Terms were not disclosed but Burnley CEO Lee Hoos called the new pact “the biggest shirt sponsorship deal in the club’s history.”