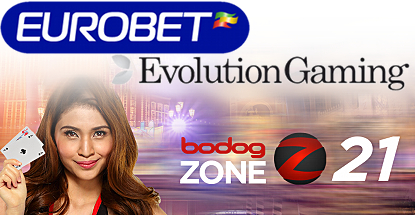 The Eurobet.it desktop site currently doesn’t feature a live dealer offering, but Evolution says Eurobet could add that option in future. Eurobet managing director Paolo Gazzocchi says the company chose to launch a mobile product first because it’s “a fast-growing channel and we must give our players the best selection of live tables for mobile play.”

Meanwhile, Bodog believes it has found a solution to the inherent limitation plaguing most live dealer blackjack offerings, i.e. the difficulty in simultaneously servicing a large number of players while keeping wait times to a minimum. Bodog, which put baccarat on steroids earlier this year via the launch of its Zone Baccarat product, has now amped up blackjack via the launch of Zone21, which Bodog expects will become a key acquisition tool.

Bodog describes Zone21’s mechanics as follows: the dealer deals the initial cards, with one Player hand shared by all. If the Player hand hits a blackjack, the round is over. If not, Players are prompted to make a decision. The dealer deals one card to Player at set intervals until the player busts, makes a total of hard 21 or is dealt six cards. The dealer will then deal the house cards until it busts or has a total of soft or hard 17.

Bill Hu, Bodog’s Casino Product Director and proud creator of Zone21, says he’s not bothered by purists objecting to anyone daring to tinker with their beloved game, as the company’s research suggested that “online blackjack players get more frustrated by not being able to play at all than by the ‘purity’ of the game itself.” Hu says Zone21 is the best solution for “allowing everybody, not just a select few, to play.”