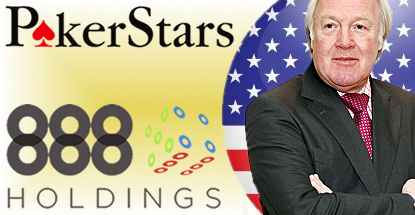 The CEO of UK-listed online gambling operator 888 Holdings has broken ranks with the majority of his brethren by saying he’d welcome the entrance of PokerStars into regulated US online poker markets. Brian Mattingley (pictured) told the Las Vegas Review-Journal that 888 competes with Stars across Europe and while Amaya Gaming’s latest acquisition is a “formidable competitor,” Stars’ return to the US “would make all of us work much harder and it would expand the market.” Mattingley said he’d “much rather have a small slice of a large pie than a big piece of a small pie.”

Mattingley’s opinion came on the same day that the New Jersey Division of Gaming Enforcement (DGE) announced it would begin licensing talks with Amaya on Thursday. PokerStars has a pending online tie-up with the Resorts Atlantic City casino and DGE director David Rebuck told the Associated Press he was “optimistic that [Amaya] know what the rules are and I fully expect them to be very aggressive because they want to be here.” Amaya attorney Marie Jones said the company was equally “optimistic they will get this done quickly.”

888 is the only operator currently active in all three US online gambling states, providing poker technology for the Delaware State Lottery’s online monopoly, operating its own poker site on the All American Poker Network in New Jersey and providing poker software for Caesars Interactive Entertainment (CIE) sites in New Jersey and Nevada. CIE boss Mitch Garber, whose company has led the charge to defend America’s shores from a Stars’ invasion, declined to offer his opinion on Mattingley’s comments.

888 also hope to ink a tie-up with a California tribe as that state preps to open its regulated online poker market. Keeping PokerStars out of California is the primary motivation behind the ‘bad actor’ clause in the online poker bill recently proposed by a coalition of the state’s Indian tribes, but Mattingley told the LVRJ he wasn’t a fan of bad actor clauses.

Like most UK-listed operators with dealings in US regulated markets, 888’s share price took a tumble after last week’s Amaya/Stars announcement. Since the markets opened on Friday, 888 shares had fallen from 125p to a new yearly low of 111p before rallying somewhat to close Wednesday at 115p. Compare that with Bwin.party digital entertainment, which closed Wednesday down 0.5% to 100.7p, a low point not seen since September 2012.

888’S SPANISH SPORTSBOOK: BETTER LATE THAN NEVER
Spain is a market in which Stars dominates the online poker vertical, with 888 a distant second. 888 is among Spain’s online casino leaders but Stars’ parent firm just received regulatory go-ahead to add blackjack and roulette to its Spanish-facing site, meaning 888 will face even more competition from the 800-pound gorilla. Worse, Amaya CEO David Baazov has vowed to add sports betting to his new acquisition’s repertoire, leaving no vertical safe from Stars’ reach.

888 had hoped to launch its Spanish-facing sportsbook in time for the kickoff of the 2014 FIFA World Cup, but that ship has obviously sailed. On Tuesday, AZARplus reported that the launch likely wouldn’t take place until August. Probably just as well, as Spain’s appetite for betting will presumably take a sharp downturn now that the Spanish team has flamed out in the group stage. Olé, olé, oh whatever…